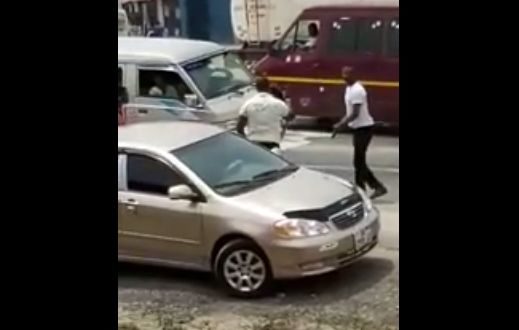 Man speeds off from further assault on Accra-Cape Coast Road

Police to provide full details on the arrest of suspected gunman

The Ghana Police Service has arrested an unidentified man who was seen in a viral video brandishing a pistol while physically assaulting another motorist.

In a statement made on the official Facebook page of the Service, it said the man had been arrested and the weapon he was brandishing has been retrieved.

“The person involved in attacking the motorist has been arrested and the weapon retrieved. Full details will follow soon,” the statement said.

Earlier, GhanaWeb reported the incident as an unidentified man brandishing a pistol while physically assaulting another man has been captured on video.

The amateur video that has been making rounds on social media shows the two men on the shoulders of a road that is believed to be the Accra-Cape Coast Road.

Unsure what led to the two getting into such a confrontation, the tall lankier-looking man, wielding his gun in his right hand, more than once gets clean slaps to the face of the other man.

With two cars parked just around them, the two continue to engage in an argument, even as the other man makes intermittent attempts to walk away from the one brandishing the gun.

His attempts fail every time because the one with the gun walks right back on him, using the least opportunity to hit him in the face with his left hand.

Another man (a third person) wearing a black and yellow basketball tan top joins in, attempting to separate them but without fail.

At the next opportunity, the man who was on the receiving side of all the abuse, rushes to his car and quickly prepares to drive away but is again chased down by the man wielding the gun.

With no access to the man now because he is in his car, the man with the gun turns on his anger to the car, smashing the side mirrors and the windshields of the car before the car finally makes it onto the road and the driver speeds off.

In a post shared by a Facebook user called Bonifacio Edem Anthony, who claims to be a cousin of the man who was assaulted, he explained that it was an issue of the latter trying to bring to attention the careless driving of the gun-wielding man.

“This just happened some few hours ago, you driving carelessly and dangerously and my cousin went to tell you to be a little careful because you have a gun you started hitting him, you fink my cousin is scared of guns… Hmmm I thank God for my cousin’s life,” the caption read.

Social media users are calling on the Ghana Police Service to identify the man publicly brandishing a gun and also for causing fear and panic among motorists.

Watch it all here:

Previous Watch highlights of Ghana-Portugal clash as Asamoah Gyan sets new record, Ronaldo scores
Next This Week on Twitter: Ghana Qualifies to Qatar 2022, President celebrates His birthday, and Many More