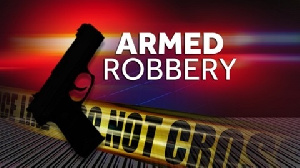 A male student has been robbed of GH¢5,000 at Atinka Junction in Ahodwo in the Kumasi Metropolis of the Ashanti Region.

The incident, which occurred in the afternoon of Wednesday, 21 October 2020, follows the robbery and shooting of a Chinese man close to the same place within the metropolis.

The robbers were alleged to have bolted with the money on a motorbike.

Narrating the incident to OTECNEWS, the mobile money vendor, whose shop the victim had visited to transact business before the robbery occurred, noted that: “So, we were here this afternoon, a while ago, a guy approached us; because of what happened yesterday [shooting and robbing of a Chinese man], we couldn’t allow the person to stand beside us.

“So, we told the person to go far a bit. He said he was from the bank, Fidelity bank, and that he’s coming to withdraw money, so, he was with a polybag. We didn’t know what was in it, so, he said he was waiting for somebody to send the money so that he withdraws the money from me. So, he was there waiting, there was a motorbike rider that passed by him and went to turn round and took the money and left. According to the guy, the guy said GH¢5,000.”

The armed robbers were said to be in green trousers similar to army colours and were seated on a motorbike that headed in the direction of Kaase road.

The residents of the area have expressed disappointment with the police with regard to the security situation in the area, especially after Tuesday’s incident involving the Chinese man.

“We’re very disappointed with the police. After the incident, they were here, they just rushed here and we were pleading with them to either send a patrol team or mount a police checkpoint. But all they said was that they cannot come and mount a checkpoint just because of us. We were very disappointed.”

The Adiebeba police command has commenced investigations into the matter.

The incident involving the Chinese man took place at Ahodwo in the Kumasi Metropolis as the victim went to purchase recharge card from a vendor.

The four unmasked attackers rode on two motorbikes to commit the crime.

Narrating the incident to Elisha Adarkwah, the card vendor explained that he only realised the men were four and on two separate motorbikes after they shot the Chinese man and sped off.

He said: “I came this morning and opened my shop.
“I saw Chinese men, they parked at the other side, so, they crossed the road to come and buy Vodafone credit from me.”

“So, when they came, he told me that he’s buying GHS100, so, I took the credit and I was about to give it to him and he had this small bag under his armpit.”

“I saw a certain man at the back, he took the bag from the Chinese man’s armpit, when the Chinese turned to look at the person who did that, the man shot him.”

A nephew of the victim, however, indicated that the bag, which the robbers made away with, did not contain any money except documents.

The victim has since been taken to the hospital but is said to be in critical condition.