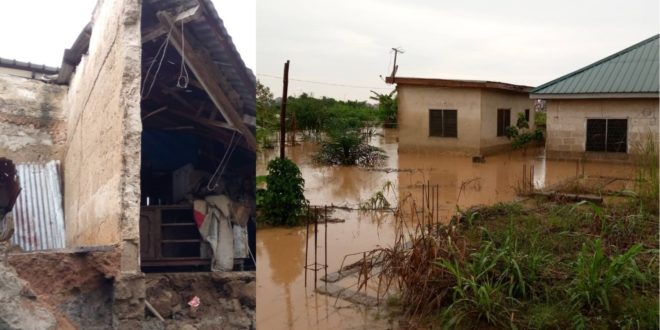 At least 11 houses have collapsed and hundreds of people rendered homeless while properties running into several millions of Ghana cedis have been destroyed after Tuesday’s rainfall at Sokoban, a suburb of Kumasi in the Ashanti Region, MyNewsGH.com can report.

One person has been reported injured after his building collapsed on him according to the assemblyman of Sokoban who confirmed this to the media.

The Sokoban New Site School and other houses have also had their roofs ripped off in view of the storm that accompanied the several hours of rainfall.

According to Hon Kwadwo Boateng, the cause of the flooding was as a result of city authority’s failure to restrict people from building on waterways.

He also accused traditional leaders (Chiefs) in the area of selling waterlog lands to developers.

Meanwhile, it took officials of the Ghana National Fire Service several hours to rescue victims of the floods from their homes after roads were blocked