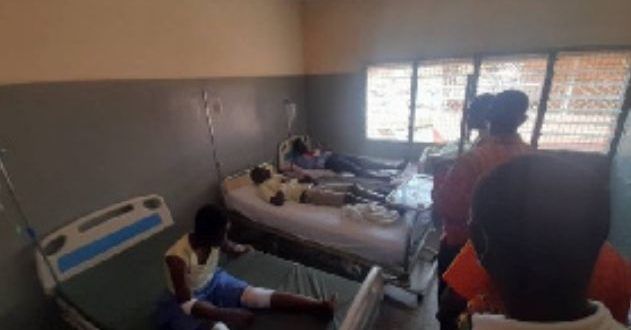 Share
More than 50 students of Bompeh Senior High School in the Western Region, have sustained various degrees of injury in the early hours of Thursday on their way to school after a moving train engine failed and all doors locked them in.

The students, who were occupying the train, were forced to break the windows while others used the emergency exit points to save their lives after suffocating for some time.

Jumping out of the stationed train, they landed on the broken glasses on the floor which caused various injuries to them.

A victim among the students who led the students out of the window said they saw the fire from the front coach and all the passengers rushed to the back leading to overcrowding and the breaking of the glass.

“When they saw the fire, they all moved to my side and were pushing against me. So I broke the window at the back and exited using that side. The doors were all locked and we had no air in the coach. So it was the means we found for escape,” he said.

The victims are currently on admission at New Takoradi Clinic and European Hospital in the area receiving treatment.

Speaking to the Manager of the Company, Ernest Arhin noted that all expenses to be incurred by the students regarding their health in the situation, would be catered for by his outfit.

He was, however, concerned that the incident inspired fear and panic among them when it was not supposed to be so. According to him, they would not have suffered the injuries if they remained calm.

“First time experience together with the fact that life is precious, everyone was fighting for their lives and it all resulted in what we saw. If they remained calm, we wouldn’t have seen the level of injuries recorded,” said the Manager of the company.

He nonetheless encouraged the students not to hesitate in employing the services of the train company because of the incident to which they have become victims.

“In spite of the incident, they should not say they will not board the train again. It is the safest means of transportation.”

He assured that “our technical team will also see to it that the technical faults are rectified.”

Previous 29-year-old Ghanaian found dead in a US wood company – Report
Next C/R: Man, 42, killed and dumped near Health Centre