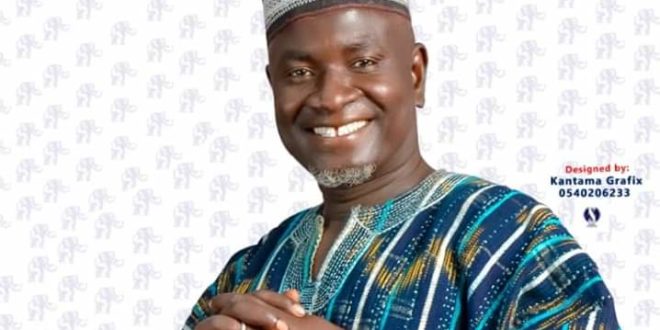 Alhaji Iddrisu Sulemana popularly known as Professor Kalamonia has today Monday 20th May, 2019 won as NPP Chairman for the Savannah Regional at a peaceful election held at the Assembly Hall of the Damongo Senior High School.

Professor Kalamonia once contested for the position of 1st Vice- Chairman of NPP in the Northern Regional elections and lost before the Savannah region was carved out of the Northern region.

Alhaji Iddrisu Sulemana, 62,  is a businessman, philanthropist and a known financier of the NPP.

Speaking exclusively to Bole based Nkilgi Fm shortly after the election, Proffessor Kalamonia thanked all delegates across the Savannah Region and promised to uphold all promises he made during the campaigns.

He called on all NPP faithful to rally behind him to succeed.

Before ballots were cast the NPP National  Secretary John Boadu urged delegates to elect hardworking executives who will  ensure victory through hardwork for the party.

He said the party has done enough by creating the Savannah region and ready to develop the infant region.

Madam Rita Asobayire,1st Vice Chairperson of the party, who was the  Special Guest of Honour spoke on the need for party unity and togetherness saying “without unity, the party will not have it easy winning election 2020”.

The Deputy Chief of staff Lawyer Samuel Abu Jinapor urged the newly elected executives to work hard since the region has a lot to do to defeat the opposition NDC in 2020. He said out of seven (7) constituencies, the NPP can only boast of one (1) seat which is shows the party is not what it used to be over the years in the region.

He said Damongo constituency for instance used to be a solid ground for the NPP which had the party’s candidate winning twice from 2000 to 2008 to represent the constituency in Ghana’s Parliament.

The Deputy  Chief of staff urged the NPP delegates gathered not to relax but fight extra hard towards retaining power in the 2020 elections.