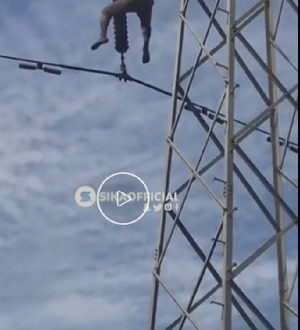 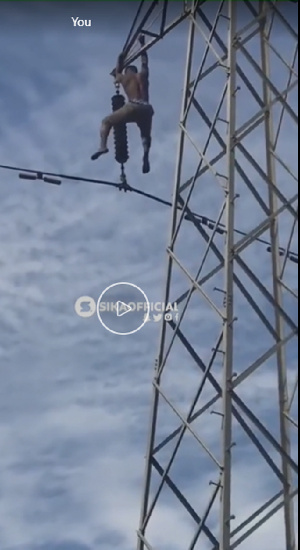 A middle-aged-looking Ghanaian who was earlier reported to have climbed a high-tension pole at Kasoa, a community in the Central Region, has been electrocuted to death.

Personnel of the Ghana Police Service and the onlookers who tried to stop him from getting to the high-tension wires of the pole failed.

Another viral video cited by GhanaWeb showed that the man had touched the high-voltage wires with his feet.

After hanging off a disc insulator of the tension pole for something, the man, unfortunately, stepped on the conductor which immediately electrocuted him.

Before stepping on the conductor, onlookers can be heard telling him not to do so but he could not hold his balance.

Earlier, GhanaWeb reported that the man climbed the high-tension pole to allegedly protest the current economic hardship in the country.

In an earlier viral video, the man was seen climbing the high-tension pole as bystanders made many pleas in attempts to get him to back down.

Also in the video, a vehicle of the Ghana Police Service could be seen, creating the impression that the police officers were on the scene to help get the man off the pole before he endangered his life even more.

“A man has climbed the high-tension poles in Kasoa and, according to eyewitnesses, says he won’t come down despite the police on site. He says he’s tired of life and the economy,” Asante tweeted.

An onlooker, with a Nigerian accent, was also heard running commentary in the background of the video, saying that a Ghanaian man had climbed the pole because of the hardship in the country.

Watch videos from the incident below: