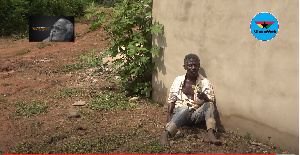 In the last three days, rains have been recorded in various parts of Accra, amidst scorching sunshine indicating the onset of the harmattan season.

A man identified to be in his late 50’s has had to spend his entire day lying helplessly on the streets at Old Ashongman Estate, with no shelter over his head to protect him from the sun or rain.

The plight of One Million, as he’s popularly called, was brought to the attention of GhanaWeb by a Facebook user, Cynthia Delali Dekportor in a post shared on her wall.

“I gathered a group organized money and sent him to his hometown around the mountains but they rejected him and their reason being he left the town over 35years and never visited. Long story short, they brought him back and dumped him almost at our gate and he’s been there the past three days in the rains. Kindly help me with the names of institutions that take care of sick people without family and friends,” she shared on her Facebook page on Sunday morning.

Following Cynthia’s appeal, on Facebook, GhanaWeb visited her neighbourhood at Old Ashongman Estate to find out the condition of One Million.

On arrival, GhanaWeb’s cameras captured the homeless old man lying on the ground in front of the gate of a residence.

With his speech affected by the sickness he is suffering, a frail-looking One Million couldn’t provide any proper response to questions posed to him.

He had been lying at the same spot for over the past three days and had ended up defecating on himself, attracting a horde of flies all over.

“Everybody in the area refers to him as ‘One Million’; he has been providing labour assistance to those who need it as a means of survival. He told us he hails from Aburi, around Tutu on the Akuapem mountains and we sent him there. Unfortunately, when we got there, we couldn’t locate his home or family despite our frantic efforts.

“He really needs help. He needs medical help to regain his strength and health so that at least he will be able to go back home. He seems to be suffering from stroke, he is said to have fallen all of a sudden. He has not been to his hometown for many years now and that is why it has become difficult to locate his family,” Emmanuel Narh, a resident of the area told GhanaWeb in an interview.

One Million is said to have been taken to the Dodowa government hospital for medical attention through the help of the Assemblyman of the area, however, the hospital is said to have sent him back to the neigbourhood after it was discovered that he had no family to support him.

According to Cynthia Delali Dekportor, her attempts to reach authorities to address the issue of the homeless, old sick, and dying man has proved futile.

“I did (contact the police) but they said it wasn’t their job. I should contact the Assembly or so and asked if he was dead? I said no, so assume that if he was dead, they would have come to pick his corpse. So, I realised that I didn’t have any option other than to post it on Facebook,” she told GhanaWeb.

She expresses hope that the story of the homeless old man would reach the appropriate headquarters for him to receive the required assistance.

“Let’s see if the appropriate authorities will get in touch as soon as possible because he’s been here for the past three days. It’s been raining and he’s been under the rain, I don’t know how long he will be able to survive this if he doesn’t get help,” a worried Delali told GhanaWeb.

As at the time of filing this report, all efforts by GhanaWeb to reach authorities to speak on the matter had not been successful.

Previous VIDEO: DJ switch is Ghana’s Best Young DJ of the Year
Next Sarkodie reported me to the police, threatened to teach me a lesson – Stonebwoy