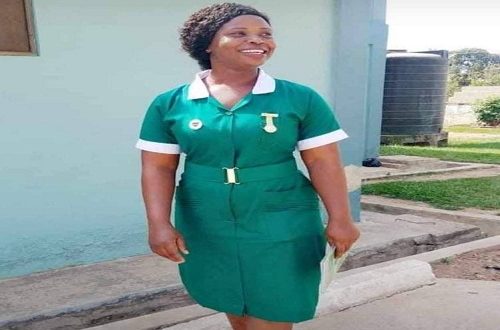 Ruth Ama Eshun, a Ghanaian nurse has reportedly been gang-raped and killed by unknown assailants.

Reports has sighted by social media indicate that Ruth Eshun, was murdered at a town called Ayuom in the Bosomtwe District which is near the Ashanti regional capital of Kumasi.

Ruth Eshun was a community health nurse stationed at the Sewua Health Centre. According to the assemblyman of the area, Prince Adutwum, she was last seen by her colleagues leaving the health centre for her home.

“The nurse left work in the morning. According to a doctor at the Sewua health centre, she closed from work at about 3:00 pm. She then left to town for her personal errands.

She stays at the new site in the area so when she was returning home, that was when she met some unscrupulous persons who murdered her,”

The news of Ruth Eshun’s death has sparked a lot of social media reactions with many calling for justice for the deceased.

Meanwhile, the Ghana Registered Nurses and Midwives’ Association has condemned the gruesome murder of Eshun.

In a statement released on Friday, February 7, 2020, the association described the incident as an “inhumane” act.

The statement tasked the police to “investigate this matter with the urgency it deserves and bring the perpetrators to book.”

It further urged that the government must “ensure the safety of Nurses and Midwives working in all parts of the country especially the hard to reach areas.” Ruth Eshun:

Ruth Eshun who is in her 30s left behind a husband and three children.