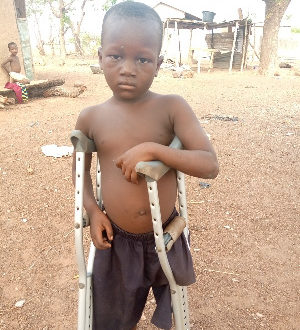 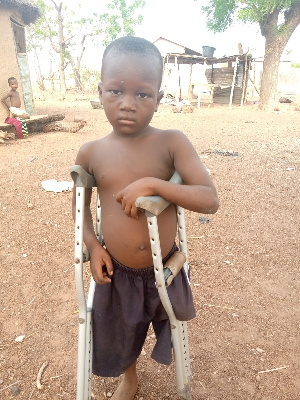 A six-(6)-year-old physically challenge orphan, Hanan Nurideen is in need of support as he struggles through life with his grandparents in the Balshie community in the Nanton District of the Northern Region.

Little Hanan lost his father at a tender age and with his mother remarrying in the city and left him behind to live with his grandparents in Balshie, a farming community in the Nanton District.

Hanan who now lives on crutches, last year while he was been carried on a bicycle to school had an accident on the way which resulted in the broken of his leg and subsequently amputation.

Hanan’s grandfather, Suleimana Adam in an interview told GhanaWeb that when the incident happened he took little Hanan to a local healer for treatment.

N Yab Suleiman said on the third day when they return to the local healer for examination and treatment, they found out that the leg was becoming black which raised some concerns.

Suleimana added that he sought the concern of the traditional healer to send Hanan to the Hospital for medical treatment which he agreed.

He said that upon arrival at the hospital and the doctor seeing the state of the leg became angry that they delayed till this point before bringing him to the hospital.

N Yab Suleimana said he later informed Hanan’s leg was rotten and the only way to save the boy’s life was to amputate the leg, which initially he was hesitant but upon consultation, he was advised to allow the doctors to carry on the operation.

According to him, he was charged 1,000 cedis for the operation of which he was only able to raise half of the money becuase the hospital insisted he pays it in full before the operation could be done.

N Yab Seleimana said he had to run around and gather the money and pay for it before the operation was done to save little Hanan’s life.

Meanwhile, Little Hanan’s grandparents are aged now, with little energy in them to adequately look after themselves talk less of taking care of their little grandchild who now lives on crutches.

“The problems facing us are too numerous to enumerate and you never could tell, Hanan could become a great man tomorrow but am also limited to what I can do for him.” Hanan’s grandfather said.

He said the boy’s condition is a nightmare to them, adding that it is their wish the boy go to school and become someone useful in the future and look after them too.

Hanan’s grandfather said they would not mind if someone responsible who will take proper care of their grandson and ensure he complete school adopts him and look after him.

Little Hanan’s grandparents called on philanthropists, and NGOs to come to their support and help them fend for little Hanan’s education.