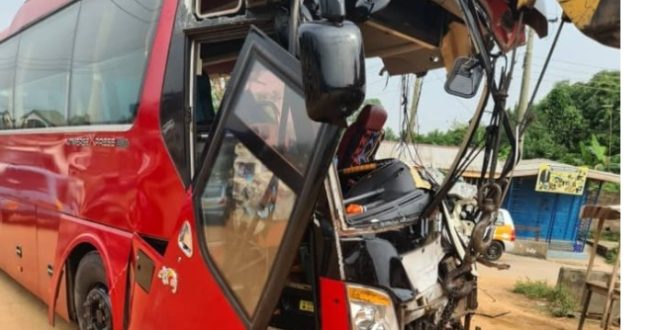 Share
The University of Education, Winneba (UEW) has set records straight on an accident at Asuboi involving some students.

The accident, which occurred on Sunday morning, reportedly claimed the lives of nine students of the institution while several others are injured.

But the Public Relations Officer, Ernest Azutigah, has revealed two of its students have been confirmed dead with two others missing.

Mr Azutigah said the bus had 35 of its students together with other passengers on board but they can confirm 31 are alive.

“It is not easy to lose a soul and even though these people belong to families, the university is a community and family, and we are deeply affected by the loss of life and the injuries that have occurred in this particular accident,” he said in an interview with Accra-based Citi FM.

He explained the students were returning to school on an organised bus from the Sunyani area following the UTAG protected strike.

Others, he noted, were also returning to campus after they left for the weekend.

“We are keenly following and investigating to find their whereabouts. They weren’t on an official trip. There are students who organised themselves and were returning to school,” he added.

A Hyundai commercial bus they were travelling in from Sunyani to Accra crashed into a stationery articulated truck.

The driver of the bus with registration number AK324-22 failed to observe traffic regulations when he was allegedly sleeping.