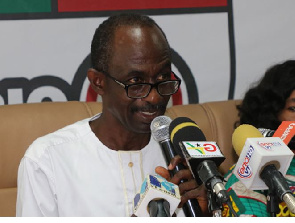 Resign and form a church; preaching appears to be your hobby – Asiedu Nketia to IGP

The Inspector General of Police, David Asante Apeatu has come under acerbic attack from the Chief Scribe of the National Democratic Congress (NDC), Mr. Johnson Asiedu Nketia over his recent calls for the disbandment of vigilante groups in the country, MyNewsGh.com reports.

According to him on Kumasi-based Nhyira Fm, the Police Chief appears to be living the life of a preacher and a radio host rather than a law enforcer who has joined the bandwagon of politician and making baseless noise in the country.

Mr. Asiedu Nketia emphasized that the IGP is supposed to take action and nib criminal activities in the bud and not go about preaching through press conferences as though he was appointed to convert souls for Christ.

“If he does not want to be an IGP and wants to be a Radio Host or a preacher or establish a church, he is free to do that. He was not appointed because of press conferences”, he lashed.

Continuing he added “Did they ask him to take action or preach? They have given you the power in the boson of the law…all service men and women under you have been given immunity to fight against crime but he has abandoned all these and is preaching”

He is of the view the IGP has lost control of the system paving way for which vehicles and personnel of the police is being used for operations without his knowledge calling for his resignation.

“He has lost control of the system. Had it not be that there is a situation in the country, they moved men, ammunition and vehicles for an operation he says he knows nothing about, he must resign”, he insisted.

It would be recalled that the IGP last week directed political parties to denounce vigilante groups claiming allegiance to them with immediate effect.

According to the IGP, it is against the country’s laws for political parties to have such groups that have recently been disturbing the peace of the country.

“We want to appeal to all political parties to immediately denounce their own vigilante groups to create the necessary awareness that will embolden the police,” Asante Apeatu stated.

The police he revealed are poised to arrest and profile any group of people claiming to be vigilante groups irrespective of their political affiliations.

“We are declaring zero tolerance against political violence and vigilantism”, he promised.