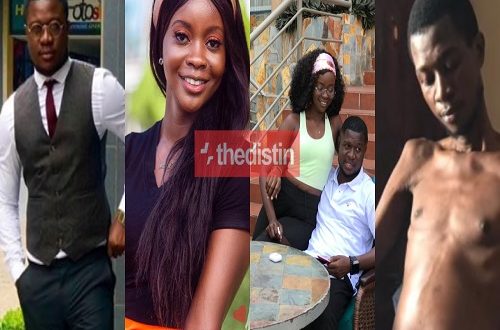 Ray Styles: Wife Of Pencil Celebrity Artist Speaks After The Death Of Her Husband

Felicia Omari the beautiful wife of Ray Styles popularly known for his works as Penciled Celebrity has finally spoken after the death of her husband.

The young man, before his death, was a very talented artist and painter who made portraits and paintings of mainly celebrities – the reason why he earned the name Pencil Celebrities.

He made paintings for the First Lady Rebecca Akufo-Addo, President Akufo-Addo himself, and other celebrities, including Naa Ashorkor Mensah-Doku, Bola Ray, just to mention a few.

Ray’s health condition became public in the month of August 2020, sparking a nationwide campaign for a donation toward his surgery.

Ray Styles, known in real life as Emmanuel Apraku, died sadly on October 1, 2020 in India. He had been on admission at the Apollo Hospital in New Delhi in that country.

In a video shared by his wife, one can see the lovely couple all happy and merry. Parts of the video captured the last days of Emmanuel Apraku as he’s known in real life.

She shared an emotional video that is moving social media users to tears. The video proved that their love was indeed ‘for better and for worse’

Sharing an emotional video on her Facebook handle, Felicia wrote:

“NO MORE PAIN, NO MORE SUFFERING, NO MORE TEARS.

YOU PRAYED. WE PRAYED. THE WORLD PRAYED AND GOD LISTENED.

FOREVER IN MY HEART.

REST WELL MY LOVE, UNTIL WE MEET AGAIN

Previous Western Togoland: Attorney-General must explain why Papavi, others were freed – Security Analyst
Next Kwesi Pratt explains why the people of the Volta Region reject NPP in every election