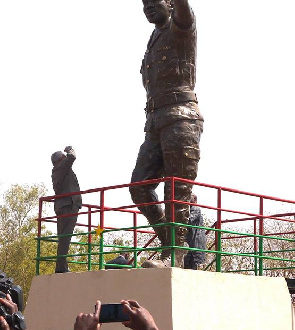 The former President also called on the people of Burkina Faso not to allow the pain of the tragic circumstances that led to the demise of Thomas Sankara and some of his compatriots to be lost on the country.

Making remarks after a solemn ceremony on Saturday to unveil a huge statue of Thomas Sankara at the Conseil de l’Entente in Ouagadougou where Sankara and twelve of his colleagues were assassinated on 15 October 1987, Flt Lt Rawlings who is the Honorary Chairman of the Sankara Memorial Committee, said Burkinabe must work together towards the progressive future Sankara envisaged for his people.

“Let us keep reminding ourselves that noble people have died for this country, not only in the fight for independence but also in the fight for true freedom and justice,” the former Ghanaian leader said.

The ceremony was addressed by President Kabore and other leading members of the Sankara Memorial Committee and attended by families of the late Sankara and the twelve who fell with him in October 1987.

The former President was equally grateful to the families of President Sankara and his colleagues for their presence at the ceremony.

Earlier during the ceremony, the former President had joined President Kabore to lay a wreath at the spot at the Conseil de l’Entente where Sankara died.

After the unveiling of the statue on Saturday, the former President later took part in the closing ceremony of the 50th edition of the Pan African Film and Television Festival of Ouagadougou (FESPACO). Leading figures at the event included the Burkinabe President, Malian President, Ibrahim Boubacar Keita and Paul Kagame, President of Rwanda.

The former President also paid a courtesy call on President Kabore on Sunday where they discussed matters relating to the Sankara memorial project among others.