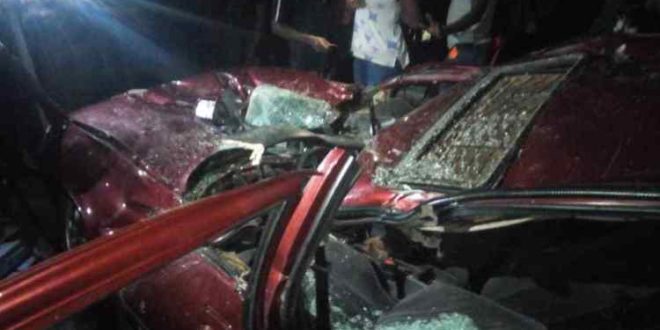 Radio station struck by lightening and thunder; billboards fall on cars in heavy rains in Kumasi

Some giant billboards sited along some of the busiest highways within the Kumasi metropolis were uprooted by a heavy storm that accompanied hours of torrential rain in the Ashanti Regional capital on Thursday night, MyNewsGh.com has gathered.

Many have been displaced after the downpour as roofs of some homes were ripped off; others were forced to evacuate as flood waters invaded their rooms last night.

At Afful Nkwanta, it took a spirited effort by some fire officers to rescue some passengers on board a Toyota Corolla salon car, who had been trapped under a billboard that fell on the vehicle alongside others.

The victims were rushed to a nearby clinic for medical attention, as they all sustained some injuries.

Station Officer at the Regional Fire Office, Augustine Adugba led the rescue team to the scene.

Some onlookers who were present at the accident scene called on city authorities to remove all dangerous billboards from the road side to curb a future incident that may be fatal.

Many houses, in poorly planned and heavily populated areas were submerged by flood waters at Aboabo, Oforikrom, Sawaba and other areas in the city.

Household appliances and other personal effects were seen afloat in the rushing streams of rain water, while stranded individuals sheltered themselves at petrol stations and other obscure places just to avoid either becoming wet or being washed away by the flood.

Parts of the city were thrown into total darkness as electricity was immediately taken off due to the lightening and thunder that came with the rain.

Lightening struck at the studio of Ahotor, 92.5 FM; host of Spot Kick, Philip Appiah, popularly known as “Philipp Inzaghi”, who escaped the lightening by a hair’s breadth, in a post on Facebook said, “I returned to work today after being on a sick bed for a week…and God is soo great to save my life whiles on air for the evening sports show. I would’ve been dead 20minutes ago at the studio sake of Lighting….. Hmmmm, father the entire sports crew thank you for our lives this evening…”.

“I’ m just imagining how my lifeless body would be carried from the studio to the mortuary and the reaction from my family and fans”, he said in another post.

As at the time of filing this story, no loss of life had been reported.