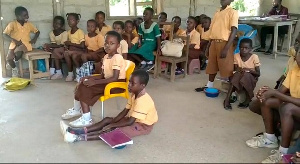 Teachers, parents, chiefs, and pupils of Obuasekrom in the Atwima Mponua district of the Ashanti region have expressed worry over a death trap school threatening the lives of the pupils and teachers. According to most of the parents who spoke to this reporter, some teachers, due to the poor nature of the
Obuasekrom D/A Primary school, come in and run away the next day.

They said several appeals to the district assembly and other stakeholders have proven futile as the situation keeps worsening.

A visit to the school by GhanaWeb saw the dilapidated school building that was also open to rainwater, air, and any other foreign materials. Most of the structures which were only standing woods supported by roofings made the classrooms very open to the public.

Due to its openness, students are easily destructed by any foreign noise during study hours. Another sad thing observed was that, whilst most of the young pupils were sitting on the bare floor, others were also sitting on a kitchen stool to study.

Pupils who spoke to this reporter revealed that they have been in the unfortunate situation for many years without getting any support.

“We don’t have chairs in most of our classrooms. We sit on the bare floor to study, and the teachers in the school too are few. We need chairs and we’re also pleading with the authorities to build a proper classroom for us”. They said.

Some parents who spoke to this reporter said, most of their wards are forced to come home when it’s about to rain. Lamenting on the sad situation, the worried parents said they needed urgent intervention to redeem their wards from this calamity.
“We all pay tax, and we’re Ghanaians too. Why do they treat we the villagers as though we’re not part of Ghana?”. A parent angrily quizzed.

Other chiefs speaking to GhanaWeb revealed that most of the open structures that are used as classrooms were even put up during J.J Rawlings’ era.

They have therefore pleaded with NGOs, philanthropists and other well-to-do individuals to come to their aid to fix the death trap school block.

Assembly member for the Obuasekrom electoral area, Hon. Akwasi Ayeebo speaking to GhanaWeb, said, though he has reported the state of the school to the DCE, Hon. Isaac Kofi Marfo and the MP for the area, Hon. Isaac Asiamah on several occasions,
but they have all given him a death ear.

He said, aside the death-trap school block, pupils from Kindergarten (KG) to Primary six had no chairs and desks to sit on, and others even share the few available desks. 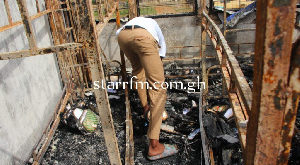