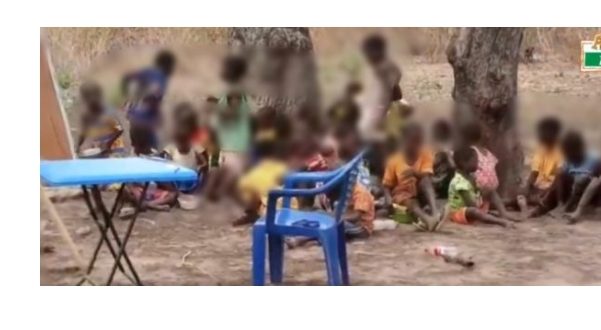 Some of the pupils learn under thatch while others are compelled to sit on tree roots and dilapidated muddy shed.

Even worrying is the absence of desks, teaching and learning materials in the basic school.

Headmaster of the school, Nicholas Nakogya, in an interview on Adom FM’s morning show, Dwaso Nsem Thursday, said appeals sent to the District Education Directorate have fallen on deaf ears.

He said school session always ends whenever it rains or when the sunshine becomes unbearable.

Mr Nakogya revealed that the school from kindergarten one to primary six, had only two teachers and a teacher trainee. This, he said, makes academic work very tedious.

The headmaster noted that some of the pupils prefer to go to the farm than attend school because they are not excited to learn under the dilapidated structure.

“The situation is growing from bad to worse. We have reported to the Municipal Education Directorate and they are yet to respond,” he bemoaned.

Mr Nakogya feared the lives of the pupils will be in danger ahead of the raining season if nothing is done about their current situation.

However, the Nkwanta South Municipal Education Director, Jonathan Kosina, said there is no need to panic.

As an immediate measure, he said through the help of a philanthropist, they have 100 dual desks for pupils of Chati Akura.

“I have followed this Chati Akura primary school issue for the past three years and we are making headway,” he assured.

The Nkwanta South Municipal Education Director said the situation of dilapidated structures is not peculiar to Chati Akura primary school but they are working hard to address the infrastructural deficit.

Previous GH₵50,000 donation: Afia Schwarzenegger invokes Antoa, other deities to vindicate her
Next Why NPP MP is calling for suspension of Free SHS policy, others