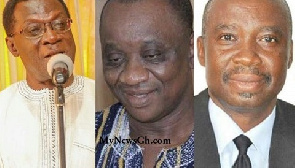 MyNewsGh.com is learning that several names including the Member of Parliament (MP) for the Salaga South Constituency formally of the Northern region, Mr Salifu Adam Braimah, Deputy Northern Regional Minister Solomon Namliit Boar and former Minister of Education in the John Agyekum Kufour administration Professor Christopher Ameyaw-Akumfi have all come up as possible contenders for the positions of Regional Ministers.

President Akufo-Addo earlier this month, presented the Constitutional Instrument on the creation of the six new regions when he hosted delegations of chiefs on February 12, 13 and 15 which officially increased the regions from 10 to 16.

Speaking at the ceremony to present Constitutional Instrument (C.I.) 113 for the creation of the regions at the Jubilee House, he named Nalerigu and Damongo as the capitals for North East and Savannah region respectively.

The President named Dambai as the capital for the Oti Region.

President Nana Addo Dankwa Akufo-Addo set up a Commission of Inquiry, headed by Justice S.A. Brobbey, to collate views and to make recommendations for carving out the new regions following petitions, he received from individuals across the country.

The Commission after nationwide consultations with the major stakeholders’ recommended the establishment of the six regions in its report to the President.