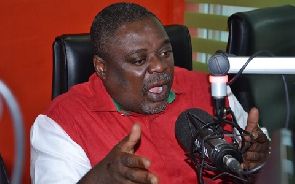 The Founder and CEO of the Atta Mills Institute, Koku Anyidoho has said he’s sad and pained that the IGP, David Asante-Apeatu has allowed politicians to destroy his hard-earned reputation in his distinguished Police career.

The IGP, David Asante-Apeatu in the past fortnight has come under heavy pressure from the public and some civil society groups to resign his position following the violence that marred the by-election in the Ayawaso West Wuogon constituency recently.

Those calling for his resignation say he should do the honourable thing by stepping down because he has been unable to bring to book all the unidentified armed men who were using the police vehicles and weapons to brutalize innocent and helpless civilians during six persons were shot at close range injuring them severely.

“Speaking of the Ghana Police Service, I think the IGP would do the honourable thing and tender his resignation because his continuous stay as IGP has become very untenable, especially in the light of conflicting reports between the police and National Security,” MP for Kumbungu Ras Mubarak said.

The Ghana Police Service had earlier denied knowledge of the several hooded and heavily armed individuals said to be operatives of the National Security who wreaked chaos during the by-election.

Subsequent events supported by video footage from the scene in which a police officer is seen driving the hooded men however, indicates that denial is not enough and the police command, headed by the IGP have questions to answer.

Speaking to host Kwaku Owusu Adjei on Anopa Kasapa on Kasapa FM Monday, Koku Anyidoho who is also the former Deputy General Secretary of the opposition National Democratic Congress (NDC) urged the IGP to stand his grounds and do only what is right by his conscience and the constitution of Ghana.

“All I’m saying is that let us to save the image and identity of our police senior police officers and generals so that we don’t allow politicians to destroy the inegrity of people who have served hard. IGP Apeatu may have served 30 to 35 years, distinguished officer, work with Interpol at a point in time, very fine gentleman. It pains me that politicians will destroy him, that’s where my pain is coming from because he’s a friend. We shouldn’t be doing that to him or any officer.

He added: “As it is now politicians are making it very difficult for him, if Bryan Acheampong (Minister of State in-charge of National Security) can marshal troops without the knowledge of IGP, is that not making his work very difficult. And who knows other Acheampongs who will come in the years to come, so all Ghanaians should wake up and say to politicians that we’ll not allow you to destroy the image of our security institutions. We are tired, let it come to an end, then we are building a nation.”