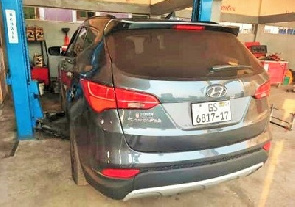 A Hyundai Santefe vehicle, which was snatched from its owner at gunpoint by three men in Ho last week Wednesday, has been retrieved by the police.

Luck eluded the gangsters at the border town of Dadedzi just as they were attempting to cross into Togo with the vehicle with registration number GS 6817–17, on Friday.

Deputy Superintendent of Police (DSP) Anthony Danso, Ho Municipal Police Commander, who confirmed the story to the Ghanaian Times, said that so far, no one had been arrested.

According to him, the gangsters accosted the owner of the car at about 8pm, near the Ho Executive Garden, when he was driving home.

DSP Danso said that the owner of the car (name withheld) was travelling with two visitors from Accra on board when the three men snatched the vehicle from him (owner).

According to the Police Commander, one of the gangsters pulled a pistol and demanded the ignition key from the owner.

Apart from the vehicle, DSP Danso said that the men seized five cellular phones and an unspecified amount of cash from occupants of the vehicle.

He said after snatching the car, the men ordered the owner to board the vehicle, tore his cloth, blindfolded and tortured him, and sped towards the Adaklu direction.

DSP Danso stated that the gangsters freed their hostage in the dark and drove on, and he (vehicle owner) reported the case to the police at Ho.

The police commander said the Ho police sent messages to the various security units, prompting a vigorous monitoring and coordination by the units, to retrieve the stolen car.

DSP Danso revealed that the vehicle snatchers were negotiating with the Togolese security operatives at the frontier to cross into Togo when a Ghanaian policeman suddenly appeared at the scene.

He said the gangsters thinking the policeman was after them, abandoned the car and fled the scene.