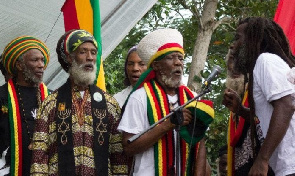 The Police have thwarted an attempt by the Rastafari Council of Ghana to demonstrate over the decriminalization of marijuana slated for Wednesday.

The Ghana Police Service which was supposed to provide security for the demonstrators declined to describe the decision to march for the decriminalization of marijuana as an illegality.

The Police have also sort an ex-parte motion which was heard in court on Monday May 6, 2019 and adjourned to Thursday May 16, 2019.

The Head of the Rastafari Council Kurx Kpongo in an interview with Starr News expressed their discontent about the move by the Police.

“The Police are infringing on our constitutional rights they say we don’t have any right to demonstrate.”

Last Month, the Rastafari Council, Ghana suspended its intended march over the decriminalization of marijuana.

The postponement followed the Police’s inability to offer security due to the Easter celebration.

“As a responsible body, we have put in place mechanisms to ensure that the safety of the Rastafari community and allies in this struggle are protected and will hence postpone the March to an agreed date,” the Council said in its statement.