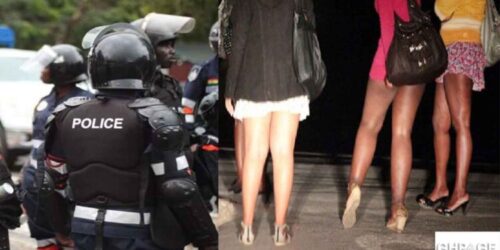 The Pokuase Union of prostitutes has refused to render services to the Ghana Police for the next five years.

In a press statement, the union revealed that they will not provide any form of sexual intercourse to the Ghana police service.

The union came to this conclusion after their hideout was raided and belongings scattered by the police.

According to the president of the union, Fresh Girl Baby Jet, the police did not accord them preferential treatment when they raided their hideout.

This, they say will serve as a lesson to the Ghana Police service to treat them with respect.

They also entreated other prostitutes groups to also heed to their intention and stop providing services to the police.

“We, the above mentioned group, have come into concomitant position that, from henceforth, we shall not render any form of sexual intercourse, intimacy or jolly ride to any police officer in Ghana for the next 5 years ahead of us”, excerpt of the statement read.

This comes after the Accra Regional Police Command in collaboration with the Ga North and West Immigration Officers, NADMO, a task force from the Ga North Municipal Assembly and police personnel from the Amasaman Divisional Headquarters arrested about 33 alleged sex workers in a dawn operation at Pokuaase.

The authorities also demolished unauthorized wooden structures believed to be the abode of these sex workers.