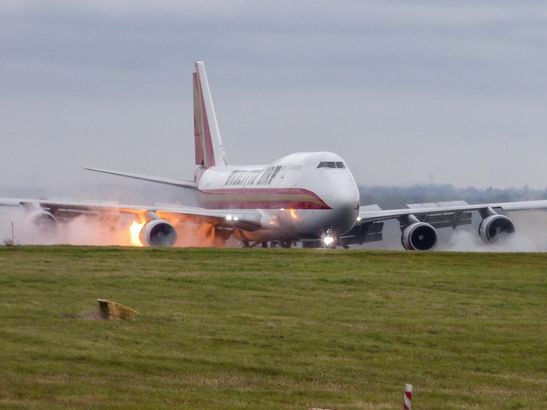 Plane bursts into flames on runway after ‘botched landing’

No one is believed to have been injured on the jumbo-jet cargo carrier, which arrived from Leipzig in Germany and lit up the evening sky with orange flames.

The aircraft could be seen bursting into fire with a “bang” on the runway.

In an Airshow World video, the right-hand side of the plane could be seen in orange flames as the aircraft touched down on the tarmac.

One witness said that the freight plane’s engine “ingested something” as it hit the ground.

Along with the flames, there was also a loud bang, according to the witness.

Some people on social media have speculated that it may have been a bird that got caught in the engine as the plane hit the runway.

Earlier this week, an airport was shut after a freak plane crash during take-off left two passengers and a pilot in hospital.

Teesside Airport was closed “until further notice” after the incident unfolded shortly after 9.30 am on Saturday.

The pilot and the two passengers, who were onboard the light aircraft, were rushed to hospital – with one taken by air ambulance with serious injuries.

Rob Cherrie, general manager at County Durham and Darlington Fire and Rescue Service, said the aircraft “had taken off then come back down again very quickly.”

Cherrie, who was incident commander at the scene, said: “I wouldn’t like to speculate on why that occurred.”

He said fire crews had been forced to cut the three people out of the plane.

Witnesses told how the plane soared to around 300 feet before banking sharply then plunging to the ground inside the airport perimetre.

One witness said: “I heard the plane engine start to sputter, then looked up to see it bank left sharply.

“The engine sounded like it was really struggling, then it just seemed to cut out.

“It looked like the pilot managed to keep the plane fairly level as it started to come down, but then it just dropped rapidly, then I heard a thud behind the tree line. Thankfully there was no explosion or fire.”

Tags after BOTCHED BURSTS FLAMES INTO landing’ on PLANE runway