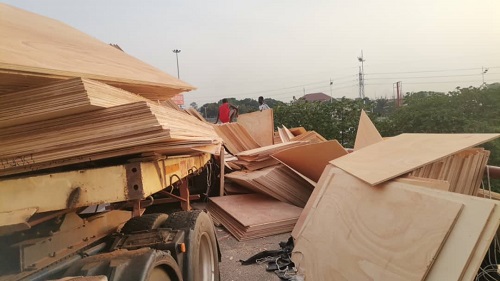 A mild gridlock at Sofoline Interchange today as an articulated truck carrying about 9000 sheets of plywood is currently stuck on the road after an accident occurred on Sunday.

Dozens of squatters living under Sofoline Interchange in the Kwadaso Municipality of the Ashanti escaped death after 9000 sheets of plywood came off a moving trailer on the Interchange.

About three wooden structures occupied by the squatters under the Interchange were completely destroyed after some sheets of the Plywood fell on top of the structures.

The accident according to a report by OTEC News’ Kwame Agyenim Boateng, occurred on Sunday March 27, 2022, around 6:00 p-m.

Some poeple who escaped unhurt disclosed that, they were all outside when thier structures were completely destroyed in the accident

The trailer with registration number GS- 6983-21 was transporting the Plywoods from Goaso to Accra.

Driver of the vehicle Mohammed Idrisu in an interview said the car which  was well loaded experienced some balancing after journeying through what he described as poor road.

He added that the sheets of plywoods came off the car when he decided to negotiate a curve on the Interchange.

At the time of filing this report, no security official had come to the scene to help clear the road for commuters.