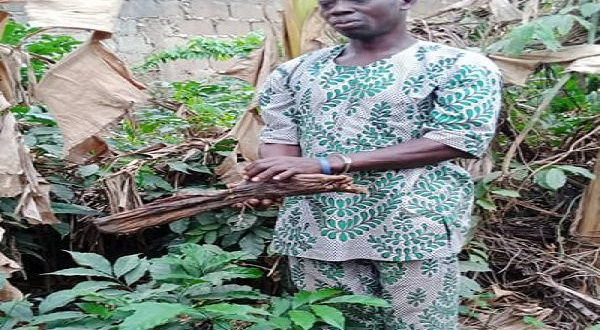 The police in Osun State have arrested a 40-year-old suspected ritualist, Adeboye Moshood, with human parts.

The suspect was arrested by a Joint Task Force (JTF) on Tuesday, February 16, in his house at Gbayarin, in Gbongan community, Ayedaade Local Government Area of the state.

It was gathered that one of the suspect’s neighbours perceived the odour around his house and alerted others. They challenged him but he refused to answer them. He instead took the sack away from the house and hid it in a nearby bush. The neighbours reported the matter to the JTF officials in the area. They discovered the sack where he hid it, found decaying human parts inside and arrested the suspect.

“We don’t know where Moshood got the human parts. We just perceived the odour and asked his wife what was smelling in their house. When Moshood realised that we were suspecting him, he took the bag out of the room and kept it at the backyard. That was where the policemen retrieved it.” said one of the neigbours.

Moshood was later paraded at the Police Command Headquarters in Osogbo with the human parts by the State Police Commissioner, Olokode Olawale.

Speaking to newsmen, the suspect said: “I went to Modakeke on Monday and while I was returning, I stopped at Iwaro when I saw a body on the road. I reasoned that some parts would be useful for me. Then I cut them out for money ritual.”

Previous Why John Boadu will not contest NPP chairmanship
Next Death Prediction On Ofori-Atta By Prez. Akufo Addo’s Spiritualist Playing Out? -As Covid-19 “Complications” surfaces