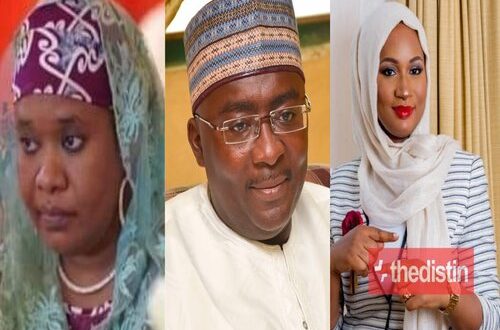 Newly elected Speaker of the 8th Parliament of the Republic of Ghana, Alban Suman Kingsford Bagbin mistakenly honored the presence of Ramatu Bawumia while addressing the second lady, Samira Bawumia at the inauguration of President Nana Addo Dankwa Akufo-Addo.

The Speaker of Parliament Alban Suman Kingsford Bagbin was sworn into office in the early hours of today who stood on the standing orders of the house and sworn into office, the 275 MPs Elect, thereafter proceeds to the inaugural ceremony of the President elect Nana Akufo-Addo and his Vice Dr Bawumia.

Interestingly, information reaching this portal from Walewale in the West Mamprusi of the Northeast Region where the Vice- President Dr Mahamudu Bawumia hails, lives a woman identified as Ramatu Bawumia.

She is allegedly, the 1st wife to the Vice President, a clear confirmation of what the Speaker said earlier, which implies Bagbin never made a mistake with the name of the wife, but rather brought to light the name of the beautiful wife of Dr Bawumia who carries her life activities at Walewale.

Immediately the speaker of parliament made that mistake and corrected it, social media users who seems to know much also shared pictures of her on their wall.

One that Thedistin.com sighted on while sharing the information wrote “As soon as I heard the name Ramatu Bawumia, I knew the person who submitted the list to the Speaker wants Ghanaians to know something. Who composed the list“.

She is pretty as Samira, just that she has been kept away from the public if she is indeed the first wife of Bawumia.

I’m of the view that, in as much as today happens to be a great day for the Vice President, God in his own intelligence chooses to honor her as well, to join the happiness, which I see not a deliberate attempt to have disrespect the 2nd lady, but a divine intervention of honouring Madam Ramatu in mix of the gathering.

However, Vice president Bawumia on October 15, 2020 celebrated his mother, a woman who also bears the name Ramatu Bawumia but has Hajia in it.

Well, this has caused a massive stir on the internet as to whether Ramatu Bawumia is the first wife of Bawumia like some netizens are saying.

Below are beautiful photos of Ramatu Bawumia:

Previous Ahead Of Reopening: Registrar Of Peki  College Of Education Cautions Students
Next Sammy Kuffour for Kotoko CEO role?