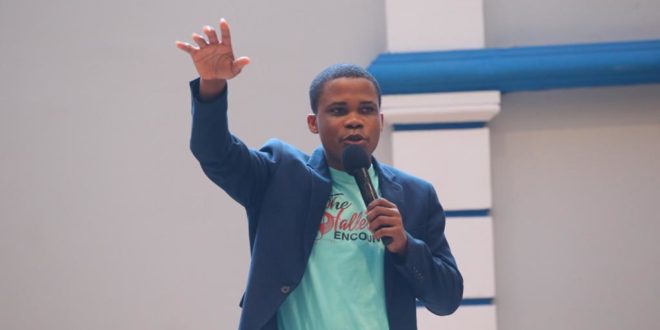 The Youth Pastor the Church of Pentecost, Teshie-Nungua Area, Pastor Ebenezer Korankye Agyapong has called on young people to get involved deeply in personal devotions in order to be grounded in their faith.

Pastor Agyapong who is also a member of the National Executive Committee of the Youth Ministry also said although group fellowship and prayers are good, personal devotion is key to being grounded in Christ.

“Fast on your own, read your Bible, pray and meditate on the word for 2 hours 24, minutes every day, and teach others to do the same,” he said.

Pastor Agyapong said these during a one-day seminar for 120 Youth Workers in the Tehsie- Nungua Area on Saturday, November 14, 2020 at the Agnes Boahemaa Gyimah Temple at C5, Nungua on the Theme Grounded in Christ.

Pastor, Ebenezer Korankye Agyapong disclosed that young people have the potential to become zealous for Christ whenever they are trained well, thereby impacting the whole church positively.

“The foundation of every structure or building has to be solid to withstand attacks such as rain, floods and wind, just as the house described by Jesus in Mathew 7: 24-27 which could withstand all adversities.

“In order to build the houses or foundation of the life on the rock which is Christ, young people should treasure personal devotion,” Pastor Agyapong said adding, “Tithe on your time, give God two hours and twenty-four minutes of your time daily. This is 10 percent of the 24 hours you are blessed with every day.”

Pastor Korankye Agyapong also encouraged the youth to take notice of time wasters such as spending too much time on social media and being in the wrong company.

He said unleashing young people who are not grounded is very dangerous since they will end up supporting non-Christians values.

Mrs Priscilla Yirebi, Pastor’s Wives representative on the National Youth Executive Committee and pastor Kwadwo Obeng , the greater Accra Youth Ministry travelling Secretary also threw  more light on the vision of the Youth Ministry, aspects of the vision such as the Small Groups Concept as well as the Dilemma Bible Discussion Concept respectively.