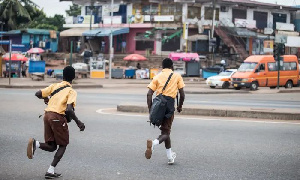 Pedestrians in Accra are at risk of suffering electrocution, as a number of street light poles in the capital have their wires exposed.

Children particularly are at the greatest risk using the walkways.

A number of the poles have their joint wires that connect power from the underground mains to the poles dangling outside the galvanised poles.

In April this year, the Daily Graphic undertook a fact-finding visit to some parts of the national capital and gathered that many cables were hanging out of the poles.

A good number of the wires which were covered with Sellotape and others that were naked, according to some residents, had remained unattended to for months.

The Daily Graphic also observed that some of the lids covering the wire joints were missing, while in some cases the Sellotape used to insulate the wires had been removed, exposing the live wires.

The exposed wires in broken junction boxes have been blamed on lack of maintenance and persistent theft of copper cables and the metal covers that hold the cables inside the light pole pipes.

There are about 40,000 street light poles, mainly wooden and galvanised ones, under the jurisdiction of the Accra Metropolitan Assembly (AMA)

Among the areas visited were the Central Business District (CBD), Kaneshie, the Graphic Road, the Barnes Road that stretches from the Trades Union Congress (TUC) to the Holy Spirit Cathedral, Achimota, the High Street and the Liberation Road.

Although the wires had been Sellotaped, experts said they still posed a great danger to pedestrians.

“The cables inside the galvanised poles may be exposed and can touch the metal poles. So if anybody touches the poles, especially in this rainy season, the person can be electrocuted.

“Besides, since most parts of Accra are flood-prone, when it rains and the floods get to the level of an exposed wire, anybody who dare step in the water is likely to be electrocuted, since water is a good conductor of electricity,” an engineer with Power Distribution Services (PDS) who asked not to be named said.

At Adabraka, a number of people, including schoolchildren, walk past the dangerous street light poles, often unaware of the risk of receiving electric shocks if their bodies touched the cables dangling outside.

This is a danger the pupils and the teachers of the Rev. Lartey Adotey Memorial School at Adabraka face daily, as the school has one of the dangerous light poles close to it.

“People, including children, have the right to life and these street lights, which are meant to be helpful to us and provide us some safety on the streets in the night, are now a threat,” the Adabraka District Head Pastor of the Apostolic Church, Rev. Andrews Nortey, said.

“We do not have to wait for a calamity to happen before we take steps to solve the problem. I hope that the city authorities will be proactive by ensuring that children are not exposed to these dangers,” he added.

At the CBD, pedestrians using the walkways in areas close to Ministries, the Octagon and the AMA new office near the Accra City Hotel or former Novotel and the Tema Station were spotted walking very close to the light poles that had their wires exposed.

“I always use the walkway near the AMA office and the Accra City Hotel to school but I have never taken notice of these dangerous wires hanging out of street light poles,” Nana Ato Afful, a student of the Accra Technical University, said.

To find answers to the challenge, the Daily Graphic visited the Department of Urban Roads and PDS, where the authorities mentioned the AMA as the entity responsible for the maintenance of the street lighting system.

When the AMA was contacted, an assistant engineer in charge of Work Schedules, Mr Eric Afful Baiden, acknowledged the problem, which he said had persisted since 2017.

He blamed persistent theft of electrical cables and destruction of street lights as a major challenge undermining the assembly’s effort to maintain the street lights in the capital.

According to him, the government collected three per cent levy on street lights and paid it to PDS, yet no percentage of the levy was disbursed to the metropolitan, municipal and district assemblies (MMDAs) in Accra to carry out the maintenance of the street lights.

“We have about 40,000 streets lights under the jurisdiction of the AMA alone and we need a lot of funds to maintain these public facilities,” he said.

Mr Baiden appealed to the Ministry of Energy to support the assembly to tackle the challenge to make the streets of Accra safer.

Accra must be safe for all

In 2014, the City of Accra joined the 100 Resilient Cities pioneered by The Rockefeller Foundation (100RC), a global network that helps member cities around the world to become more resilient to the physical, social, and economic challenges that are a growing part of the 21st century.

The Resilience Strategy represents a holistic road map of immediate and long-term actions to ensure Accra is better equipped to face the challenges of the 21st Century.

With rapid urbanisation presenting a host of complex challenges for the city’s residents and administration, a number of the four million residents living in the capital appealed to the city authorities to be proactive in making Accra safer and more liveable.

“We do not need to wait for calamity to strike always before the city authorities take reactive measures to remove such dangers,” Rev Nortey stated.