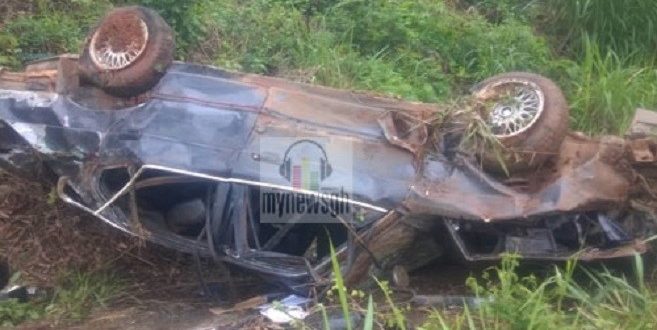 The Head Pastor of the End Time Ministry at Brofoyedru in the Atwima-Kwanwoma District of the Ashanti region, Bishop Gabriel Kwaku Osei has died alongside three members of his church in a gory car crash, MyNewsGh.com reports.

The pastor was returning from an inter-faith marriage ceremony he had officiated between a Muslim, Alhaji Kwaku Mustapha and a member of his church, Lucy Nimako at Yaapesa-Kokoben in the Bosome Freho District of the Ashanti region when the car they were travelling in, a Mercedes Benz with registration number AS-1140-R crashed on a steep hill.

The names of the church members who died alongside the pastor have been given as Pastor Victor, Madam Agyemang Konadu and Angela; they were pronounced dead on arrival at the Bekwai Government Hospital.

Three others survived the crash but sustained various degrees of injuries and are receiving treatment at the Kotwea SDA Hospital.

The accident occurred Adakabrusu, a farming community in the Bosome Freho District; eye witnesses say the pastor was driving at a top speed and suspect his vehicle might have failed on the brakes after he lost control of it on the steep hill.

One of the survivors, Joyce Eghan has confirmed to MyNewsGh.com that the vehicle actually had a faulty braking system and had run out of brake fluid; he said the pastor bought a bar of soap to substitute for brake fluid.

She said they advised the pastor to take another route via Asiwa to Kumasi, but he insisted the road they had gone by was shorter, because he had to return to the city in time to attend to other engagements.