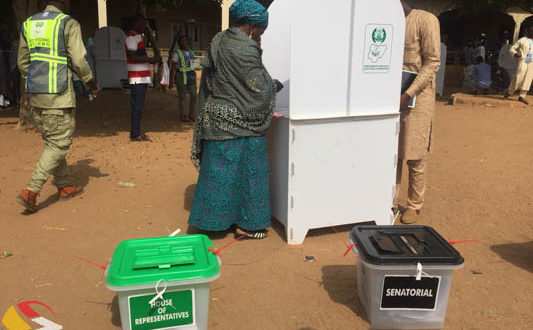 The Head of the ECOWAS Election Observation Mission (EOM) to Nigeria, Mrs. Ellen Johnson-Sirleaf has observed the Nigeria election has so far been peaceful, four hours into voting, even though voting was delayed at some polling centres.

The former Liberian president had earlier expressed confidence in the INEC to be able to deliver a peaceful and a credible election.

She gave her optimism at a briefing for the observers at the ECOWAS Commission Headquarters in Abuja, Nigeria, on February 14, 2019.

However, the Independent National Electoral Commission (INEC) on the dawn of the election day cited some logistical constraints and legal tussles as reasons to reschedule the election to Saturday, February 23.

Briefing the press in Nigeria’s capital Abuja, during a tour of some polling stations, Madam Sirleaf responded in the affirmative to TV3’s Komla Klutse’s question whether she finds the election peaceful so far.

“Yes, it is”, she told Komla Klutse who is currently in Abuja Nigeria covering the election.

She was however not able to readily tell why voting delayed in some polling stations.

The election is said to be one of the most fiercely contested in the country as the outcome will determine whether the incumbent Buhari-led APC will retain power or the main opposition party, PDP, will wrest power and bring former vice president, Atiku Abubakar, back to power.