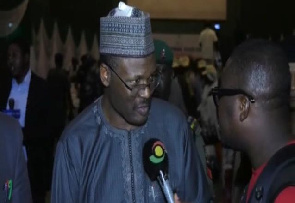 Chairman of Nigeria’s Independent National Election Commission (INEC) Professor Mahmood Yakubu says he is unfazed by counter-accusations from the two leading political parties that INEC intends to rig the elections for a candidate.

Following the postponement of the elections which was supposed to have taken place last Saturday, February 16, leaders of the two leading parties, PDP and the APC came out to attribute the postponement to efforts by the INEC to swing the votes.

But speaking in an exclusive interview with TV3’s Komla Klutse on Wednesday, February 20, Professor Yakubu debunked the claims by the two leading parties, stating that the INEC has no business in taking sides.

“We are rest assured that polls will open on Saturday the 23rd. What do parties exist for in a democracy in relation to the electoral commission?

“The best election is the one in which a party is declared a winner. For us, it is a responsibility, and we will face the responsibilities,” Professor Yakubu said.

He stated that the INEC is focused on organizing a free, fair and credible election.

“My assurance to the political parties is that we are going to be fair to all of them. The commission will be fair; we are not a political party. We have no candidate in the election; we will protect the integrity of the process. The election will be free and fair and the votes will count.”