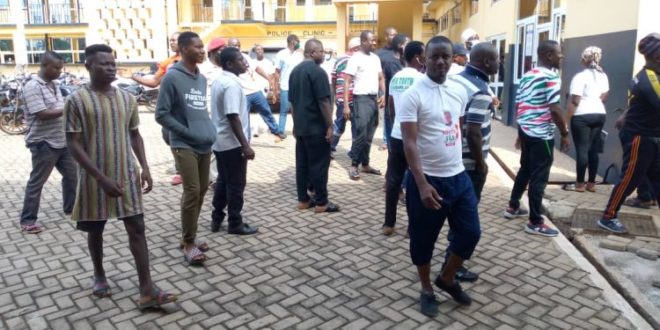 Some National Democratic Congress (NDC) members have gathered at the Ashanti Regional Police Headquarters to demand the release of 10 party supporters who were picked up in the Asawase Constituency.

The 10 persons were picked up by personnel from the Anti-Robbery Unit of the Ghana Police Service.

Although the reason for their arrest is yet to be given, the Member of Parliament for Asawase, Alhaji Muntaka Mubarak, told journalists that the armed officers raided the Aboabo Library upon a tipoff that a suspect they were looking for was in the area.

The Aboabo Library, which houses the office of the MP, is used as a meeting place for NDC supporters in the constituency.

The supporters had returned from their usual night campaign activities when the incident happened on Saturday.

The NDC supporters did not, however, take the development lightly and gathered at the police headquarters with other regional executives of the party to demand their release.

Alhaji Muntaka Mubarak who is currently at the police headquarters has been engaging the police to seek bail for the 10 supporters.

He also expressed concern that this may be an attempt to intimidate members of the NDC.

“I have seen the boys. They are in high spirits. They will make their statements and then we will see the way forward. The commander has assured us that it [the arrest] is not to intimidate us,” the MP said to the press.

“They have given us assurances that even though today is Sunday, they are taking their statements and those they believe are not part of those they are looking for, they will give them bail and we will go,” Mr. Mubarak added.

The MP further assured that the police will be “given space to do their work.”

Previous Police officer crushed to death at check pointAn on-duty Police officer in the Central Region has died after he was run over by a truck. The 39-year-old Sargeant Salifu Hifzullah stationed at Apam District Police Command was crushed to death at Gomoa Manso Check Point on the Winneba-Cape Coast Highway. According the Central Regional Police, the suspect driver Francis Akese, 50 was in charge of a Samsung Yamouzine Truck vehicle, with the registration number CR 319-11 from Mankessim towards Apam with two persons on board and upon reaching a section of the road near Greenfield Police Snap CheckPoint refused to stop when signaled and knocked down the officer. The Police officer was seriously injured and was rushed to Apam Catholic Hospital but died while receiving treatment. Central Regional Police Public Relations Officer, DSP Irene Oppong told the media that, the suspect driver has been detained to assist investigation. Latest News In Ghana. Click Here To Read Our Latest News Stories She said the body of the officer has been moved from Gomoa Apam Catholic Hospital to the Police Hospital morgue. whatsapp sharing button Sharefacebook sharing button Sharetwitter sharing button Tweet
Next Wontumi reported to police over comments about Mahama’s daughter