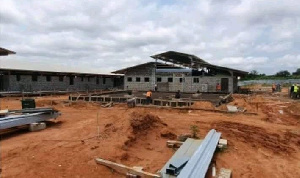 The Yilo Krobo Constituency Secretariat of the National Democratic Congress, NDC, in the Eastern Region has chastised the ruling government for hastening to commission the uncompleted Somanya District Hospital to deceive voters.

A statement issued by the NDC signed by Akumatey Emmanuel Okrah -Constituency Communication Officer of the NDC on Monday stated that the construction of Somanya district hospital project, was initiated by the John Mahama administration and was to be constructed near the University of Environment and Sustainable Development, but the NPP government relocated the facility after assuming power in 2016.

“The project was part of a Five (5) District Hospital Project in Weta, Buipe, Tolon, Sawla Tuna Kalba and Somanya was begun by John Dramani Mahama for which sod was cut for all Five (5) Weta, in the Ketu North District of the Volta Region. It must be mentioned that, funding and Parliamentary approval was secured before the NDC left power. Just like the University of Environment and Sustainable Development, this current administration is also claiming credit for the Somanya District Hospital, another JM legacy”

According to the NDC, though happy that the NPP did not abandon the 80-bed Hospital facility, the party is “extremely shocked that Nana Addo Dankwa Akufo-Addo, would commission a project that is not completed. A visit to the site would reveal the physical buildings are ready and available but technical installations of medical equipment and machinery are unavailable ”

The party stated that “We are therefore convinced that, this rush to commission the uncompleted District Hospital has been arrived at due to the fact that, the President has found nothing to cut the sod for, or commission in Yilo Krobo after cutting sod for the second phase of the Eastern University to start but having diverted the €90 million for the project to do a campus for same university at Bunso, taking away the campus from Donkorkrom which was legally mandated to host the satellite campus.

The statement concluded “we are grateful to His Excellency John Dramani Mahama for his sterling leadership and efforts in obtaining the needed financial support to commence the Project. We wish to remind Nana Akufo-Addo not to re-visit his usual habit of taking credit for what he has no hand in, and to appreciate the efforts of his predecessor, John Dramani Mahama for giving us this Municipal Hospital”.