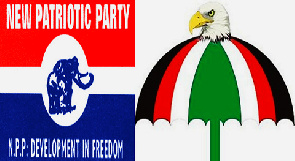 The National Democratic Congress (NDC) has welcomed the proposed April 9 meeting with the New Patriotic Party (NPP) on disbanding vigilante groups in the country.

The National Peace Council has invited both parties for the said meeting following the president’s call for them to meet to resolve the issue of political party vigilantism in the country.

After the initial back and forth by the two main political parties, the much-anticipated meeting between them has finally been scheduled.

Speaking to Citi News in an interview, the Deputy Secretary for the NDC, Peter Otukonor said the party is happy that the meeting is finally coming on as planned.

“Yes, the meeting will [come off] on 9th April. We are very excited about the meeting and we are hopeful that there will be meaningful outcomes that will help us end the activities of party militia groups from our politics. We are happy that our first meeting will help stakeholders with discussions to come to a common conclusion.”

The meeting is scheduled to start at 10 am at the Central Hotel, near the British High Commission in Accra.

The National Peace Council, the mediator, selected the date and venue for the meeting which is expected to give the Council the opportunity to table a number of proposals before the two parties to work out modalities to disband their vigilante groups.

In a letter, the Council indicated that “for effective discussions, each party is respectively expected to bring not more than seven representatives.”

When the two main political parties — were writing open letters to each other making counter-demands to dialogue and fashion out a way to deal with the situation, many political parties and other stakeholders expressed mixed reactions on the meeting.

The Centre for Democratic Development (CDD), argued that a more comprehensive solution to disbanding vigilantism requires more than just a meeting between the two parties.

Meanwhile, the National Commission for Civic Education (NCCE) says attempts to get the NDC and the NPP to meet and find ways to end political party vigilantism is good for the country’s democracy.

Whilst calling on all well-meaning Ghanaians to rally behind the efforts of State Institutions and Civil Society Organisations to finding a lasting solution to this matter, the NCCE said it is ready to help in the disbandment process.

The NCCE, asked the political parties to rise above their parochial interest and work together for the good of the country.

“The Commission calls on politicians and political parties to act in good faith in seeking national interest above partisan interest. The NCCE, with support of Ghanaians is committed to playing a pivotal role in stamping out political violence and nurturing governance on the tenets of democracy for the collective benefit of Ghanaians and nation-building. In this regard, the Commission after multiple stakeholder engagements is poised to facilitate a process of dialogue among the parties and relevant stakeholders to find a lasting solution to the menace of political violence and associated party militia activity”.