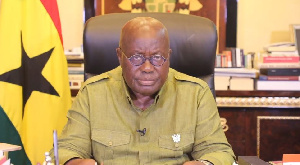 NDC elements and their surrogates have started rubbishing the agenda synonymous with what they did to the free senior high school (Free SHS) programme when it was being implemented. But the President’s agenda will see to the overhaul of Ghana’s health infrastructure.

On Sunday evening, President Akufo-Addo, as part of his eighth address to the nation on his government’s effort to combat the coronavirus pandemic, laid out an ambitious plan to tackle the health infrastructural deficit of the country because, according to him, the Covid-19 had exposed the lapses in the health system of the country and must be addressed without delay.

He said, “There are 88 districts in our country without district hospitals; we have six new regions without regional hospitals; we do not have five infectious disease control centres dotted across the country and we do not have enough testing and isolation centres for diseases like Covd-19. We must do something urgently about this.”

For this reason, the President said, “My government has decided to undertake a major investment in our healthcare infrastructure, the largest in our history. We will, this year, begin constructing 88 hospitals in the districts without hospitals.”

Per the President’s distribution plan, 10 will be in Ashanti, nine each in Volta and Central, eight in Eastern, seven each in Greater Accra and Upper East and five each in Northern, Oti, Upper West and Bono.

There will also be four each in Western North and Western regions, three each in Ahafo and Savannah and two each in Bono East and North East regions.

“Each of them will be a quality, standard-design, one hundred bed hospital, with accommodation for doctors, nurses and other health workers and the intention is to complete them within a year,” the President gave an assurance. “We have also put in place plans for the construction of six new regional hospitals in the six new regions and the rehabilitation of the Effia Nkwanta Hospital in Sekondi, which is the regional hospital of the Western Region,” he added.

The President stated, “We are going to beef up our existing laboratories and establish new ones across every region for testing. We will establish three infectious disease control centres for each of the zones of our country, i.e. Coastal, Middle Belt and Northern, with the overall objective of setting up a Ghana Centre for Disease Control.”

“The virus has also revealed the unequal distribution of healthcare facilities, as we have tended to focus our infrastructure on Accra and one or two of our other big cities. But, as we have seen, epidemics and pandemics, when they emerge, can spread to any part of our country,” he added.

“It is obvious that side by side with the investment in the physical infrastructure of our public health system, we will have to intensify our policies for the growth of our domestic pharmaceutical industry, so that we can generate our own medicines and medical supplies and products,” he noted.

He, therefore, insisted, “We should no longer be dependent on foreign imports. Further, the National Health Insurance Scheme is, currently, in a stronger position as a result of the significant reduction in outstanding arrears,” with the hope and expectation that this expanded and empowered public health system will be the most enduring legacy of the pandemic.

With that, he said, “Universal health coverage in Ghana will then become real and meaningful, for every Ghanaian deserves good health and good healthcare.”

Immediately the President ended his address, the NDC hit the rooftop claiming there was no money for such massive projects.

NDC Member of Parliament (MP) for Ajumako-Enyan-Esiam in the Central Region, Casiel Ato Forson, questioned the plan and wondered how the government was going to fund the project because the “2020 budget and the appropriation Act allocated only GH¢44 million for health infrastructure.”

Joyce Bawa Mogtari, a former minister and current spokesperson for ex-President John Mahama, posted on social media (Twitter) that the NDC administration built hospitals which the New Patriotic Party (NPP) had abandoned, but the President was promising new ones.

She then went ahead to brand the President’s decision to construct new hospitals as ‘lies’, saying “what is the plan for all of us as Ghanaians? Do we need to be promised unrealistic goals for the purpose of speech making? Eighty-eight hospitals within a year is a lie. We have hospitals; put them to use and let’s put the money back into the economy for the people of Ghana.”

The NPP strategist, Gabby Asare Otchere-Darko, defended the President’s decision on social media when he said the President was committed and was on course to getting the job done.

“I have heard some senior NDC politicians making jokes that there is simply no money budgeted for health in 2020 to allow the President to deliver 88 hospitals. Well, there wasn’t Covid-19 when the budget was made. There wasn’t any 50% subsidy for electricity and 100% free water in the budget, but that and many more are happening. The same way, before Covid-19, there was no budget for collapsed banks, savings & loans, etc. and yet this government found the money,” he posted on Facebook.

He said, “When Akufo-Addo’s Cabinet sat until 2 am last Thursday, they did not do that to drink tea and chew cream crackers. They were dissecting every aspect of this most ambitious health infrastructure programme ever to be rolled out since independence. Please tell the NDC to have patience; they must be in no rush to Dec 7. The President said the details of the hospital projects will be made transparent and open to public scrutiny and action,” before urging the public to “trust Nana, he may be unusually ambitious, but he usually puts his mouth where his ambition is and his money where his mouth is.”

Information Minister Kojo Oppong Nkrumah disputed the NDC’s claims that the NPP government had abandoned NDC hospital projects, saying some are work in progress, while others are faced with finance modelling difficulties.

“The unfinished hospitals largely remain work in progress and we will give an update on where we picked them from and how far we have come with them. There are some that we have finished and opened up, some are near completion and some have got into financial and contracting difficulties because of some issues associated with them. We will also give dates on when those in progress will be finished. It is to make the point that some may be uncompleted still, but they are not abandoned. It is work in progress; it will be finished by a particular time,” he said.

Previous GIS launches manhunt for 3 over illegal entry into Ghana
Next Speaker recalls MPs for discussions on COVID-19 tax waivers, others