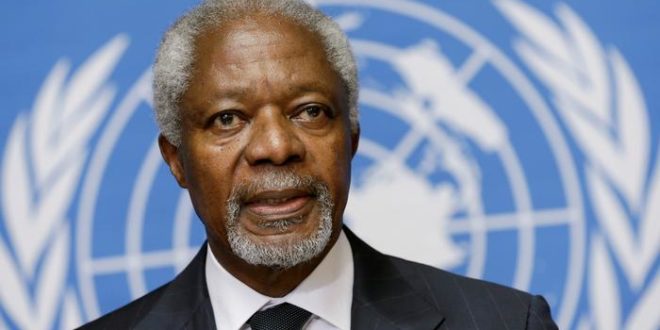 The long-held hope of the people of Kumasi and its environs to be able to fly directly from Kumasi to destinations outside Ghana without having to pass through Accra is gradually becoming a reality.

In June 2018 the president of the republic, Nana Addo Dankwa Akufo-Addo, cut sod for the construction of the Kumasi Airport phase 2 project, which was to upgrade the airport to international status. That project is ongoing and will be completed soon, after which Kumasi Airport shall become Kumasi International Airport.

My humble appeal is that the Airport be named after Kofi Annan so that it becomes Kofi Annan International Airport.

Kofi Annan was the 7th UN Secretary-General (1997 -2006) and was proudly Ghanaian. This man brought so much honour to Ghana, Africa, and the black race in general.

As a UN Secretary-General, he brought a lot of reforms to the Bureaucratic System of the UN. He helped in the combat of HIV/AIDS, especially in Africa. He helped bring peace to many trouble spots in the world especially in Sudan, Somalia, and Afghanistan.

He, together with the UN, co-won the Nobel Peace Prize in 2001 and many more honours.

Even though one institution is already named after him, that is Kofi Annan International Peacekeeping Training Center (KAIPTC) in Accra, naming the Kumasi Airport after him would be an honourable thing to do.

On one hand, it will show how dearly we appreciate the honour Kofi Annan has done us as a nation. On the other hand, his name on the airport will give the facility that international appeal it will so much need in the onset.