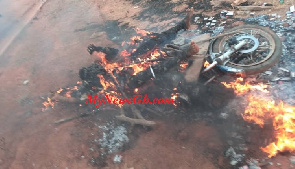 A motor rider was on Thursday afternoon lynched and burnt by irate residents of Fielmua in the Sissala East-West District of the Upper West Region for knocking and killing a pedestrian.

Police from the area who confirmed the incident to MyNewGh.com, reveals that at about 3:00 pm on Thursday, a Burkina Faso National yet to be identified aged at 30 was riding an unregistered motorbike from Hamile towards Fielmua in the Sissala West District.

On reaching a section of the road near the Catholic Church/Fielmua, Theresa Kyizagl aged 52 years who was crossing the road was knocked down.

The suspect rider who was dissatisfied with the incident removed a knife and stabbed her to death.

Subsequently, an irate mob also attacked the said rider and killed him instantly.

They later set his body ablaze together with his motorbike.

The body of both deceased persons have been conveyed to Nandom Hospital morgue pending autopsy while police disclosed they are on a hunt for the perpetrators of the lynching.