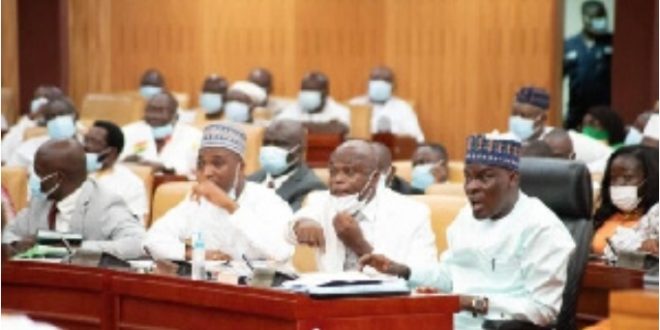 Minority shoots down approval of another €20m loan facility

Share
The minority in parliament for the second time this week has scuttled approval of a 20 million Euros Loan Facility agreement between the government of Ghana and Germany over lack of quorum for decision making.

The facility which is to finance Green Credit Line under the Reform and Investment Partnership between the two countries is expected to help cut down carbon emissions.

However, immediately after the chairman of the finance committee Kwaku Kwarteng had presented his committee’s report on the facility, minority MPs Rockson-Nelson Dafeamekpor and Bernard Ahiafor raised issues of quorum under articles 102 and 104 based on the judgment by the Supreme Court which gave deputy speakers voting rights while presiding.

They argued the numbers in the house could not meet the threshold of half of all MPs for decision making.

According to the NDC MPs, the Apex Court through the judgment has reversed Parliament as the master of its own rules mantra and thus proceedings could not continue on the agreement.

Adansi Asokwa MP KT Hammond in a reaction sarcastically asked the minority MPs to do as they please with the house and inform his side when they are tired.

This is the second time in a week the minority is citing the Supreme Court judgment to arrest approval of loan agreements.