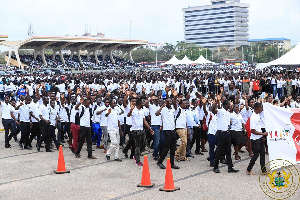 The Ministry of Health has absorbed more than 9,000 National Builders Corps (NABCO) trainees permanently while the Ghana Revenue Authority (GRA) is also processing the permanent engagement of 16,000 trainees.

Mr Mohammed Baba Darison, NABCO Greater Accra Regional Coordinator, who disclosed this to the Ghana News Agency, said almost 15,000 trainees had been absorbed into the Ghana Education Sector and that the Government flagship programme, Planting for Food and Jobs, had also engaged a considerable number of the personnel.
He said the programme was not about giving temporary jobs to the youth but served as a “transit point” of equipping trainees with the necessary skills and to empower them and exit them into permanent employment.
Mr Darison was interacting with journalists after the Ayawaso East and North Branches of NABCO donated consumables and an undisclosed amount of money to the Maamobi General Hospital in Accra.
The trainees also undertook a clean-up exercise around the facility as part of activities commemorating the two years anniversary of the Programme.
He said the money donated to the hospital would defray the debts of patients who could not foot their bills.
Mr Darison said the theme for the anniversary was, “Making our trainees permanent” and that it was their focal point going forward. “The programme has a good exit plan for the trainees,” he said.
Dr Dorcas O. Anfu Okine, Medical Superintendent, Maamobi General Hospital, expressed appreciation for the gesture and said seven patients had left the facility without clearing their bills and that the support would defray the debts.
NABCO 2020-10-24
admin
Share