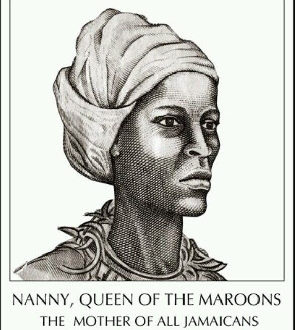 In the late 17th century, a young woman and her four brothers were bought by British slave traders and sold to plantation owners in Jamaica but as fate would have it, the young woman is now celebrated as a heroine by Jamaicans.

In 1975, the Jamaican government declared Nanny, a 17th century slave from the Asante Kingdom in the Gold Coast, a national heroine owing to the fact of her fight against white supremacy and slavery in Jamaica. Nanny is the only woman recognised among the seven national heroes of Jamaica, such a thing as Ghana’s so-called Big Six. Nanny had been taken as a slave along with her four brothers to Jamaica. They toiled on lands, from whose fruits they would not eat. Nanny and her brothers later escaped from their plantations into the mountains and jungles of Jamaica.

Nanny eventually founded a village in the Blue Mountains, on the Eastern side of Jamaica, which became known as Nanny Town. According to Faceface2africa.com, by 1720, Nanny had become the leader of this maroon settlement, where she trained her maroon warriors in the art of guerilla warfare due to incessant tension between her people and the British. As the Maroons grew in their numbers, the British colonial administration became threatened and upon further calls by plantation owners who were losing slaves and crops, British forces attacked jungles in Jamaica.

ventually, Nanny was killed in one of the conflicts with the British. Her brother Cudjoe was then forced to sign a peace treaty with the British which Nanny’s people being relocated to a place that would be called New Nanny Town. Today, Nanny is the only woman whose image graces a currency note, the $500 note specifically, in Jamaica. The people of Jamaica are grateful for an Asante woman, their ancestor, who was forced to come over lands and seas and contribute to their emancipation.

Queen Nanny (c. 1686 – c. 1755),born into the Asante tribe,Ghana. She & her relatives were sold as slaves & transported to Jamaica & ended up being a Maroon leader in Jamaica. she was declared a National Heroine in 1975 in Jamaica. Her portrait is on the 500 Jamaican dollar bill pic.twitter.com/tcYj9kyT9A