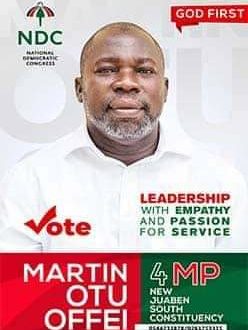 The Parliamentary candidate  for new juaben south constituency on the Ticket of the NDC in the Eastern region Dr Martin Otu Offei has showcased his plans for the development of in the municipality  if voted for.

However, within the same 100 days on he will meets all Assembly and unit committee members within the 34 electoral areas in the municipality so that they will see the kind of situation the electoral area are going through and how to overcome it.

Speaking to the Press,  he said with his expertise in ICT he will change the education system in new juaben south by establishing  Management learning skills by providing  all teachers with free Laptops,  Projectors and screens  in all schools from kindergarten to senior high school level and trained teachers how to generate contents to able to use ICT to  teach

He said he has been  training kids through IT programming which is powered by code Ghana at koforidua Technical University.

Furthermore ,  He said as the NDC Launched it people’s Manifesto, they indicated that they will be training those who want to go into craftsmanship  for free in Mahama’s next Administration,

he said he will be training 15, 000 people in the new juaben south constituency both female and male.

He said any type of work that the person will like to be trained,  he is ever ready to sponsor those people for free.

I will train Apprentice in  both male and female in the different field in my   Administration as a member of Parliament.

He said he wants to change the livelihoods of people in the constitueny but changing lives is not about giving them  10 or 20 cedis.

He said since computer science is his field ,  he  will train 12,000 Young fellas in the IT fields.

He will build drone centers in koforidua and train them youth on  how to develop drones.

He will train people on how to develop content of cartoons and computer games that are Ghanaian flavored.

Moreover,  he will traine yougsters into mobile phone repairs.

Also, he will train women who prepared palmnut oil at koforidua Ada on how to turn the waste product of the Palm into Financial relief.

And also those who sell wood and coconut.

They will be giving maximum training on how to turn the waste product into a different  system that can generate money.

He said it will boost the economy of the town and help  people to invest in the town.