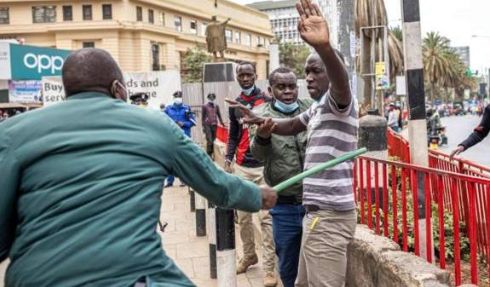 Share
A physically challenged man, 32, almost lost one of his eyes after a police officer named Frederick who’s stationed at Agona Odoben Police station in the Central Region beat him mercilessly.

Information gathered indicates that the victim had a misunderstanding with a woman who sells drugs after which she reported the incident to the Agona Odoben Police.

The police then invited the Victim to the police station to assist in an investigation only for him to be allegedly assaulted by the police officer on duty.

In an interview with EIB Network’s Central Regional Correspondent Yaw Boagyan, the victim, Stephen Crintin, who is an upcoming musician, said the police officer without asking him anything or his side of the incident just started beating him until blood started oozing out of his eye.

According to him, the police officer with the help of Community Police Personnel at the station then handcuffed him and put him in the Police cell.

The victim said he was shocked why he was subjected to such treatment as he knows he had not committed any offense.

He is, therefore, calling on the Inspector General of Police to investigate the matter and seek justice for him.

The case was reported to the Breman Asikuma Police Station for investigation where a police medical form was issued to him to seek medical assistance from the hospital.

Currently, the victim is unable to see well.

All efforts to get the Police to comment on the incident have been unsuccessful.

Previous Woman rushed to hospital after holding in farts around boyfriend for 2 years
Next A/R: Fire outbreak destroys over 10 shops at Suame Magazine