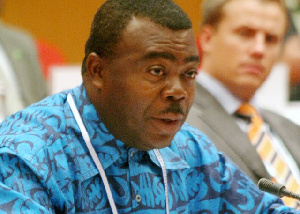 A former security guard at the State Enterprise Commission (SEC) has been jailed two years by the Accra Circuit Court for threatening to kill the Executive Chairman of the Commission, Mr Stephen Asamoah Boateng.

The convict, Arafat Issah, pleaded guilty to one count of threat of death and was accordingly sentenced on his own plea.

Issah was said to have sent a text message to Mr Asamoah Boateng demanding for money with a warning that he would kill him if he refused to send the money.

“All I need is Gh¢500, if you don’t, you will be killed or your family. Remember don’t tell anyone,” the text message as stated in the facts of the case read.

Issah had earlier pleaded with the court to forgive him and added that he had regretted his actions.

In passing sentence, the presiding judge, Ms Rita Abrokwah Doko, held that the accused was a young man and a first time offender who needed to be given a second opportunity.

The prosecution told the court that in March 2018, someone broke into Mr Asamoah Boateng’s office at the State Enterprise Commission in Accra and stole his laptop and mobile phone.

It said on April 5, 2018, Issah sent a text message to Mr Boateng and admitted that he stole the laptop and the phone.

Mr Asamoah Boateng, the prosecution said, asked the accused to return the laptop and the phone but Issah told him that he had already sold it. “Issah kept calling Mr Boateng but he largely ignored,” the prosecution added.

According to the prosecution, on April 10, 2018, Issah then sent the threatening text message to Mr Boateng.

Mr Boateng lodged an official complaint with the police and investigations led to the arrest of Issah at Kenyase.