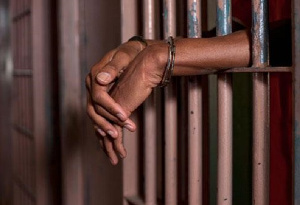 A Cape Coast Circuit Court has sentenced a 26-year-old man to a 10-year jail term in hard labour for robbing a businesswoman of her bag containing some personal effects.

Christian Quansah, pleaded guilty to the charge of robbery and was convicted on his own plea by the court presided over by Ms Veronique Praba Tetteh.

Prosecuting, DSP Daniel Gadzo said the victim and complainant, Madam Gloria Boamah, is a resident of Woraba near Moree ,while Quansah live at Gloryland area.

He said on Wednesday, July 13, 2022, around 2100 hours the complainant was standing opposite the Hutchland Hotel at Moree to pick a car home after a meeting when the convict suddenly appeared and shouted at her from behind then snatched her bag containing a Tecno mobile phone valued at GHC1,300, a medicated lens valued at GHC550 and a cash of GHC850.

The Prosecution said the complainant chased him into the bush but he drew out a knife and threatened to stab her.

DSP Gadzo said the complainant shouted for help, but Quansah managed to escape.

He said some people came around and later spotted the convict at Woraba New Site who apprehended and handed him over to the Police in Moree.

The prosecution said upon his arrest, the mobile phone and medicated lens were retrieved from him in a polythene bag, but the money and the bag could not be traced.