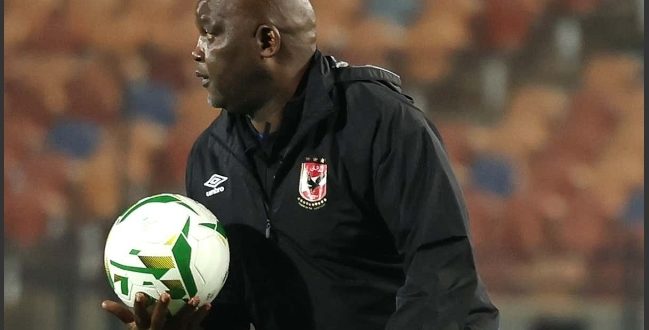 Peter Shalulile’s first-half goal ensured Masandawana secured a 1-0 victory over the Red Eagles and the victory saw the PSL champions open a six-point lead at the top of the Group A standings with two games left.

Al Ahly, who are the defending champions, remained second on the standings with the Egyptian football powerhouse having won just one game from four matches in the group stage so far, while Sundowns have recorded three victories and one draw.

Mosimane, who has won three Champions League titles including one with Masandawana in 2016, has warned the Tshwane giants that group stage form can be deceptive.

“The group stages will deceive you all the time. You can win six out of six and stay number one but let’s go to the knockout stages,” Mosimane told the media.

“And now don’t go to Morocco [to meet Raja Casablanca or Wydad Athletic] because it [their stadiums] is open now — they have 50,000 fans on the stands.”

The man nicknamed Jingles feels Sundowns are now under pressure to go all the way and win Africa’s most prestigious club football competition for the second time.

Jingles gave an example of Paris Saint Germain who were among the favourites to win this season’s Uefa Champions League title. The French giants were impressive in the early stages of the tournament, but they were eliminated in the Round of 16 by Spain’s Real Madrid.

“The pressure is on them. They have to win it. I mean, really, if they can beat Al Ahly home and away, they must just as well win it,” he added.

“If they don’t win it, it’s a PSG story again, akere [right]? What’s important is winning that trophy — put it on the table. Then we talk. Now it’s OK, it’s part of football [to lose in the group stages]. “You can win all the group matches, but I think you know the story at the end.”

Sundowns need just one point from their last two Group A matches to progress to the quarter-finals, while Al Ahly will also advance to the knockout phase if they collect four points from their remaining games.