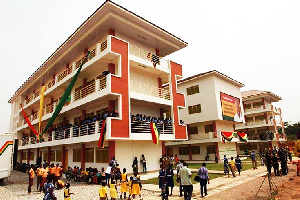 President Akufo-Addo has told the chiefs and people of Wechianu in the West District of the Upper West Region that the Mahama government did not pay for the majority of the E-Block schools it constructed.

The Mahama government had told Ghanaians that it constructed and completed some of the schools as part of its policy of progressive free education.

But, speaking to the chiefs during a courtesy call, President Akufo-Addo, who just finished his tour of the Upper West Region, rubbished the claim of putting up the structures, saying: “In many, many cases, they were unable to peruse them because they had not made proper provisions for the schools.”

He, however, assured the chiefs and their subjects that his government would look for the funds to complete all the E-Block schools bequeathed to his administration by the National Democratic Congress (NDC) government.

He lauded the desire of the Wa West to establish a senior technical high school. “I think that making sure that our young people have the skills to be able to contribute to the work and development of Ghana is very, very important,” he added.

President Akufo-Addo was grateful to the people for appreciating the great work that he was doing to move the country forward, including the creation of the Wa West District, to bring governance to the doorsteps of the people.

He jovially told the chiefs that though they appreciated his good works, it had not translated into votes for his party – the New Patriotic Party (NPP) – saying his opponent – National Democratic Congress (NDC) – still dominated the area.

According to him, the Member of Parliament for the area, Joseph Yieleh Chireh, was his good friend, but he has been in Parliament for a too long and that the time had come for them to change him and try someone from his party – NPP.

Having finished cracking the jokes, President Akufo-Addo told the traditional leaders that work on the major road networks in the area was being tackled.

President Akufo-Addo admitted the claim made by the traditional leaders that only seven communities out of the 237 in Wa West had benefitted from the One Village One Dam project. He, however, explained that the dam projects were a national exercise which his government was undertaking, and that it was executing it systematically. He was optimistic that by the end of the year, several dams would have been constructed.

The Upper West Regional Hospital is part of the “Ghana Hospital Project” awarded by the Government of Ghana in 2008, and executed by Euroget De-Invest s.a of Egypt.

The project involves the design, construction and equipping of one Military Hospital, two regional hospitals, and six district hospitals in Ghana, at a project cost of US$339 million.

It will be recalled that the government of the 2nd President of the 4th Republic, His Excellency John Agyekum Kufuor, signed a memorandum of understanding (MoU) with Euroget s.a. for the construction of the hospitals in April 2008, gave Cabinet approval for the commencement of the project on October 29, 2008, with parliamentary approval received on November 12, 2008.

The site for the Upper West Regional Hospital was the first to commence construction in August 2010, after designs and value for money audit were approved. Various challenges, however, delayed the completion of the hospital projects.

Both the Konongo and Kumasi Sewua hospitals will be completed by November 2020, with the Salaga and Twifo Praso being completed and handed over in 2020.

The total cost for the New Upper West Regional Hospital is US$52 million.

Speaking at the event, President Akufo-Addo described the commissioning of the hospital as the “highlight of my tour of this region.”

The completion and commissioning of hospital, he explained, was a good comment about Ghana.

It is this continuity, President Akufo-Addo added, that makes Ghana an attractive destination for foreign investment and foreign interest in Ghana, because agreements struck by one government are respected by successive governments.

The President reinforced the call made by the Minister for Health, Kwaku Agyemang Manu, about the need to strengthen and embrace the culture of maintenance, and urged administrators of the hospital to ensure that it does not fall into a state of disrepair.