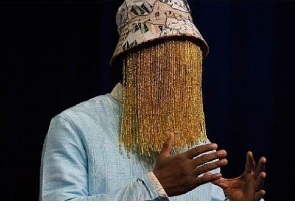 Lawyer and for undercover journalist Anas Aremeyaw Anas, Kissi Agyabeng has revealed that the only thing that has changed in a mode of operation of his client is the fact he is now going after the powerful persons in the country, MyNewsGh.com reports.

He observed that unlike in time past where his lenses were focused on minor issues like diversion of donations at the Osu Children’s Home, the Psychiatric Home among others, his focus has drifted to other more sophisticated areas where corruption is rather on the high involving some respectable persons in society.

Lawyer Kissi Adjabeng disagreed with assertions Anas’ mode of investigations lately could be equated to entrapment insisting that there is nothing relating to that subject matter because people who are corrupt are focused on making money and not what they have officially been assigned to do.

He said the calls for Anas’ head is because he is exposing people with power this time around and if Ghanaians want Anas to stop exposing corruption, they should just make it known so he stops.

“Kwame, nothing has changed about Anas Aremeyaw Anas investigative methods. People who are calling for a change in his modus operandi do not understand what they are saying. When he started, he was fighting people who do not have power backing but now he is fighting corrupt people with power that’s why they are calling for his head. If we do not want the truth, we should tell Anas so he stops. The only reason why they are complaining is because they have been caught on tape. In law what Anas is doing is not entrapment, if someone will take a bribe, nothing will stop the person.” He said.

According to him he Anas was engaged in a child’s fight but is now doing that of matured and powerful people that is why the reaction is strong damning all those who are claiming he has deviated from the rudiments of journalism.

“What Anas is doing is not entrapment. I have said it over and over but people are just failing to understand. If they bring the bribe if you will take you will take. If you won’t you won’t so where lies the question of entrapment here”, he quizzed.