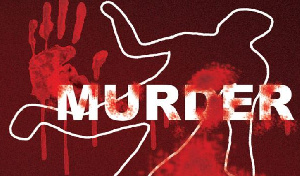 The decomposed body of a 30-year-old woman has been discovered at Awutu Bontrase in the Awutu Senya West District of the Central region.

According to reports, the deceased left home about four days ago to visit her parents at Gomoa Akramang.

Her body was later discovered near a water reservoir in the town by some residents.

Adom News correspondent, Kofi Adjei, who followed the story reported that, the deceased had parts of her body dismembered.

“Her private part, nipple, legs and eyes were all missing when the body was discovered after four days,” he said.

The situation, Kofi stated has created fear and panic among residents at Awutu Bontrase.

He said they suspect ritual killing and called for police protection to avert a recurrence.

Meanwhile, youth chief of Awutu Bontrase, Nai Kwame Larbie, who confirmed the incident to Adom News, said they have reported the matter to the police.

The body, he said has been sent to the mortuary pending investigations.

Previous One stabbed to death as teenage boys fight over girl at a party
Next Jordan Ayew better than Messi, Ronaldo – Report