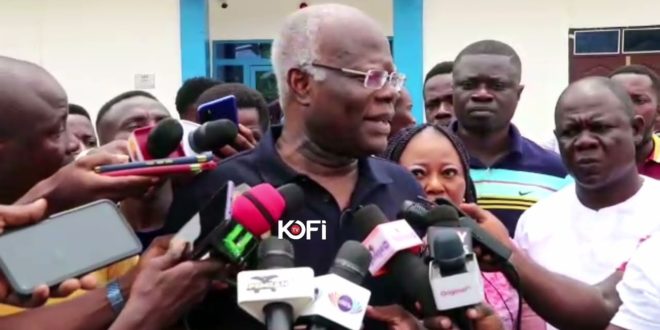 KT Hammond descends into the gutters with Kevin Taylor

Kwabena Tahir Hammond, the Member of Parliament for Adansi-Asokwa has issued a sharp-tongued response to some allegations levelled against him by US-based social media critic Kevin Taylor.

KT Hammond has been the subject of vile criticism from Kevin Taylor who alleges that the Adansi-Asokwa MP possesses ‘fake law certificate’ and engage in some activities which impugn the integrity of the office he holds.

In an interview with some pressmen, KT Hammond responded to the allegations with some strong words.

The lawmaker sarcastically admitted that indeed his law certificate which he has been using for decades was indeed fake.

“You claim I’m doing prostitution in Accra. That is also true except that I do it in Obuasi not Accra. I do the prostitution with your family members in Obuasi. When they hear that I’ve received my ex-gratia, they come to Asokwa and we spend it together. These are the issues I will addressed for now.”

KT Hammond went on to address insults hurled on the elders and residents  of Adansi-Asokwa by Kevin Taylor.

He relayed the message of gratitude from the chiefs and elders to Kevin Taylor and urged him to continue on the path.

He warned sarcastically that Taylor will receive his reward for constantly abusing people in position and showing gross disrespect to politicians and traditional rules in the country.

Previous Couple burnt to death in a fire outbreak at Kotei
Next Do you know what my mother has done? Go and ask – Shatta Wale angrily responds