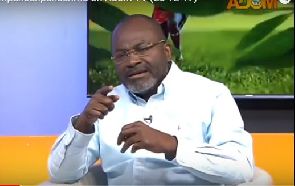 Assin Central Member of Parliament, Kennedy Agyapong has appealed to his colleague MP for Fomena, Andrew Amoako Asiamah to reconsider his decision to contest as an independent candidate in the upcoming elections.

Key figures in the governing NPP have tried to persuade him to rethink his decision but their efforts have made no significant impact.

This has resulted in the party expelling him with official notification to Parliament about their decision.

Kennedy Agyapong on Net2 TV admitted that the party has not treated the MP fairly but pleaded with him to reconsider his decision.

Kennedy Agyapong claims to have picked up information that the MP is unhappy with the NPP constituency chairman for the area for masterminding his defeat in the primaries.

He said that the chairman has vowed not to allow MPs contest twice which has infuriated Andre Amoako Asiamah.

“I have a problem with Fomena MP. I want to talk to him. The Fomena MP I hear has issues with the chairman. My investigations show that he is angry with the chairman. No one has gone two terms at Fomena before. He will remove you after one term and that’s what has made him angry,” he said.

Kennedy Agyapong also bemoaned the party’s treatment of Akwatia MP Ama Sey. Commending her for the decision not to go independent, Kennedy Agyapong said that the NPP should have protected the MP at all cost.

“I will admit that the party was not fair to some of the people going independent. One of them is Ama Sey. We suffered to convince her to withdraw her independent candidature. She was not treated fairly. When we were in opposition and she was contesting, no one said she is a hairdresser. If there is any person that should have been protected in Eastern Region, it’s Ama Sey,” he said.