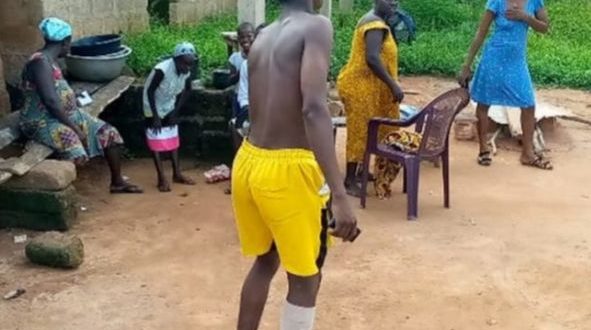 Share
A 17-year-old form three pupil at Breman Nwomaso in the Central region has escaped death after he nearly lynched by members of a watchdog committee while returning from evening classes around 10:pm.

The victim said he was with colleagues when they met over 10 committee members wielding guns, cutlasses, catapult and pepper spray.

His friends terrified, he said bolted upon seeing them.

But the victim said because he was returning from evening classes, he decided to explain to watchdog team but they rather gave him six slaps.

He said they dragged and tied him on a light pole with about five different ropes.

He said, after they fired warning shots, they used the back of the cutlass to beat him, stripped him naked and gave him several stokes with sticks.

According to him, he collapsed and woke on a bed at the Our Lady of Grace Government Hospital at Breman Asikuma receiving treatment.

Checks on his body revealed many marks of assault on his buttocks, leg, hands and his back.

Meanwhile, the mother of the victim, Abena Kenkeba said her son is in pain.

She claimed the watchdogs’ committee members after assaulting her son collected GH¢50 before releasing him.

“I think my son was already on their wanted list for no apparent reason. Because I don’t understand why he should be beaten mercilessly when he has not committed any crime” she bemoaned

Abena Kenkeba said she has reported the matter to police in Breman Asikuma.